An Inkjet Press in Dairyland

A few short years ago, production inkjet printing was still considered a risky venture. Few had installed an inkjet press, and skepticism about the quality of the output kept many from considering it. 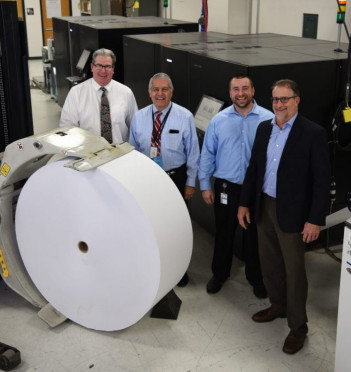 But now that hundreds of inkjet presses are up and running, and success stories abound, many skeptics are taking another look. This includes in-plants in the public sector, which are adding inkjet in increasing numbers.

The latest state printing operation to take the inkjet plunge is Wisconsin’s Bureau of Publishing and Distribution, which installed a Ricoh InfoPrint 5000 GP continuous-feed color inkjet press in October.

“With a state agency … we’re not going to be spending money on ‘cutting-edge’ technology,” admits Todd Westphal, publishing section chief. Taking chances is not part of the strategy in state government. The Bureau of Publishing and Distribution needed to be confident this technology worked as promised before investing.

So after witnessing how well inkjet has served the State of Colorado’s in-plant, and watching other state printers make the transition, Westphal and his team were ready to commit. So far, they have not been disappointed.

“One of the first jobs we ran on it, we had been running it on our cut-sheet fleet and that took four hours to run,” Westphal notes. “We threw it on the inkjet system and ran it in color, and it did it in 20 minutes.”

And unlike the aging 4100, the inkjet press doesn’t go down.

“We were seeing a lot of service taking place on our toner device,” remarks Westphal. Not so on the Ricoh InfoPrint 5000, he adds.

“The uptime is outstanding,” Westphal testifies.

Operators have been trained to do preventative maintenance, which further reduces service calls.

Uptime is a big deal for a busy in-plant like Wisconsin’s Bureau of Publishing and Distribution, which runs 24 hours a day from midnight on Sunday to 8 a.m. Saturday. The 56-employee operation pumps out 150 million impressions per year between its continuous-feed and cut-sheet operations. Transactional printing makes up 90% of the work done in its continuous-feed operation, which also includes a pair of IBM 6400 line matrix printers. This work flows from the digital printers into the inserters and is mailed out. All told, the $9.8 million operation mails about 60 million pieces annually from its 39,000-sq.-ft. facility, located 4.5 miles from the state capitol in Madison.

Switching to inkjet was a fairly easy transition, Westphal contends, with very little change to the in-plant’s workflow.

“The only difference is we’re not [using] a toner device anymore, we’re working with ink,” he says.

The Bureau of Publishing and Distribution replaced its Hunkeler pre- and post-press equipment in 2016 in anticipation of getting the inkjet press. The Hunkeler roll-to-stack post processing equipment includes an unwinder, the DP8 dynamic perforation module, the CS6 cutter, a custom-built SE6 seperating unit and the LS6 stacker. 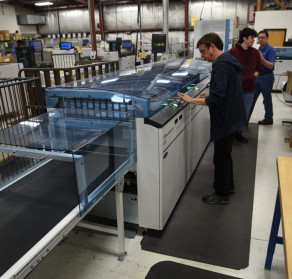 The in-plant has continued to use the Domtar 20-lb. and 24-lb. roll paper it was using on the InfoPrint 4100, and Westphal says the finished products look just as good, although the 20-lb. stock can’t be used for duplexing due to excess ink show-through. The 24-lb. paper duplexes just fine, though, he adds.

Still, he and his staff are currently testing treated paper stocks to see which will run best on the inkjet press. They especially want to qualify a card stock for the inkjet press so they can move more work over from the cut-sheet operation.

“I think a lot of our postcard work will transition over to [inkjet],” he remarks.

Westphal also sees an opportunity to increase the amount of agency work done on the InfoPrint 5000 if he can convince agencies to stop supplying preprinted Z-fold paper. The Department of Transportation, for example, has its license plate renewal postcards printed on this stock. It pays between $35,000 and $40,000 per year for this preprinted paper.

“Once we eliminate that cost to DOT, having to preprint all those forms, we can just hang a roll of card stock and print it as they need it, right off of the inkjet system,” Westphal says. Preprinting costs will be eliminated.

The Hunkler finishing equipment’s custom-built SE6 separating unit can deliver four stacks of 4.25x6˝ postcards from a 19˝ wide roll, so the press can run them four-across, and operators just have to collect the cards and put them into postage trays.

The ability of the inkjet press to add color to what were formerly monochrome documents is a big plus, he says. 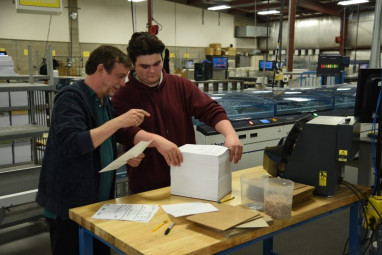 “Now we can run color in quantity off the Ricoh 5000 at the same price that we can run our monochrome print,” he says. “We’re hoping to increase our color output.”

Westphal is visiting state agencies with samples of the 5000’s work trying to interest them in adding color to their high-volume jobs, such as statements, brochures and postcards. Some agencies are already planning to do this. A two-day open house in December also helped show off the press’ capabilities.

Installing the inkjet press did not come without a few setbacks, Westphal says. It was originally scheduled to go in last March, but state budget constraints stopped the process when it was just two weeks from completion. The in-plant had to wait until the new fiscal year started on July 1 and then resubmit its proposal.

Securing the funding for an inkjet press was a challenge, but Westphal sought advice from Colorado State Printer Mike Lincoln — who went through the inkjet press justification process in his state years ago — when writing the proposal.

“Mike Lincoln in Colorado was a big help,” praises Westphal. Installation, he adds, took a little over a week.

Continuous-feed printing isn’t all the Bureau of Publishing and Distribution does. It has a robust array of cut-sheet toner printers, which includes a Ricoh Pro C7110 color device, a Ricoh Pro 8100S monochrome printer, a Kodak Digimaster 300 with a bookletmaker and two Kodak Digimaster 150s. These handle brochures, flyers, business cards, proposals and other short-run work. 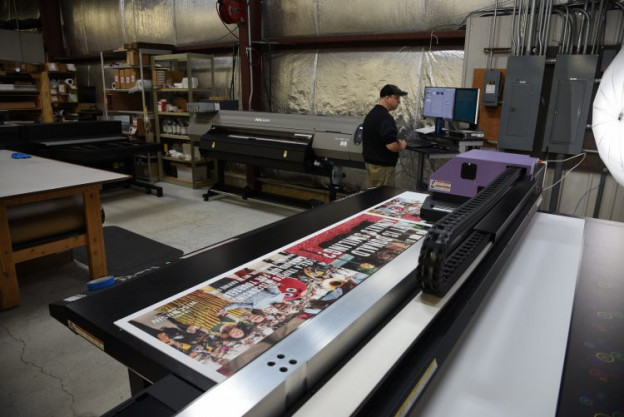 The Bureau of Publishing and Distribution’s wide-format area is experiencing a lot of growth. It recently added a Mimaki JFX200 flatbed printer (foreground) and a 64˝ Ricoh Pro L4160 latex printer. Here, Erik Lajter prepares to send a job.

“We’ve had a lot of growth in our color area,” affirms Westphal.

In recent months, the in-plant also beefed up its wide-format area with a new Mimaki JFX200 flatbed printer and a 64˝ Ricoh Pro L4160 latex printer.

“We can print directly to foam core or gator board,” Westphal proclaims. Some of the shop’s work is on display in the Wisconsin Veterans Museum and Wisconsin Historical Museum.

The Ricoh Pro L4160 has been busy producing banners, window clings and more.

“Our wide-format is another area that we’ve seen a lot of growth in,” Westphal says.

Nearly two years ago, the in-plant implemented the WebCRD Web-to-print system from Rochester Software Associates, and Westphal says it has increased the amount of work agencies are sending. The in-plant continues to visit agencies to train them on the software, and he hopes to expand it to agencies around the state so they can easily send files to the in-plant and view online proofs.

Though he hopes to upgrade the operation’s bindery equipment and add a contour cutter in the coming years, Westphal feels the recent equipment additions, particularly the inkjet press, have prepared the Bureau of Publishing and Distribution very well for the years ahead.

“With the equipment we have in place now, I think we’re set for 10 years on the continuous-feed operation,” he says.

Commentary: What’s Next in Inkjet and the Many Reasons to Adopt it
Comments
Subscribe
From eNews

Learn More
The Need to Invest in Production Inkjet Technology

Hear key industry analysts Marco Boer share his projections for the print industry and the role of production inkjet technology.