From the Editor: Fall Travels

Over the past month, I’ve seen quite a few in-plant managers in my travels, first at the Canon Solutions America thINK Ahead 2019 inkjet users conference in Boca Raton, Fla., and then at the 44th annual Southeastern University Printing and Digital Managers Conference (SUPDMC) in Wilmington, N.C. Then at PRINTING United I saw more than at the first two events combined. It was quite a show, with ample networking opportunities.

At thINK Ahead, an entire track just for in-plants was introduced this year. Production inkjet press users from a variety of in-plants were in the audience or participated in panel discussions. I talked at length with in-plant managers from Houston Independent School District, the Commonwealth of Pennsylvania, Sanford Health, The Cincinnati Insurance Companies, Cigna, and many others.

While at thINK Ahead, I got an update on one major inkjet installation that I’ve been tracking since last spring: The U.S. GPO has installed five Océ ColorStream 6000 inkjet presses and will phase them into production in November. GPO’s Greg Estep said the country’s largest in-plant replaced its old web offset presses — which were geared toward very long runs — with inkjet to allow GPO to print shorter runs more efficiently, cut waste, and take in additional work, including more variable data print jobs.

Greg participated in a panel discussion that also featured Marcie Carr, director of the Commonwealth of Pennsylvania’s Bureau of Publications, and Chuck Werninger, senior manager of Administrative Services at Houston Independent School District. Marcie talked about how adding an Océ ColorStream 3900 helped her consolidate other state in-plants and reduce her operation’s equipment footprint, while adding speed and reducing costs. Chuck noted that his in-plant’s Océ VarioPrint i300 has added value to the teaching materials the shop prints.

“We gave them color at a black-and-white price,” he said. “We are really improving the teaching experience.”

Several times during the three-day event, inkjet users noted that they were initially reluctant to replace all their digital and offset presses with a single inkjet press, but after taking the inkjet plunge, they discovered that inkjet presses almost never go down. 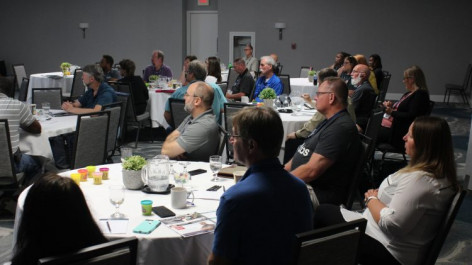 Just a few days later I was on the road again, this time to Wilmington, N.C., where I attended my fifth SUPDMC. More than 30 in-plant managers were there, mostly from the South, and I spent a lot of time talking with them about their challenges and successes.

Molly Nece opened the 2nd day of #SUPDMC 2019 with a high-energy presentation on employee motivation pic.twitter.com/meOW6KP5yQ

Wide-format printing was a popular topic. A couple of managers noted that they are installing flatbed printers and contour cutters to take advantage of this hot market. In one interactive session on wide-format, Gary Warren of Fayetteville State University and Steve Barrett, of the University of North Carolina-Wilmington talked about applications they are printing, such as elevator wraps, floor decals, vehicle wraps, flagpole banners, vinyl lettering and more. Other managers deluged them with questions and shared their own stories of popular applications on their campuses.

The 44th annual #SUPDMC conference has started in Wilmington, NC. In-plant managers from all over the South are here. Dr. Wayne Stein is doing the opening keynote on managing stress. pic.twitter.com/kezQi0YbnP

As we toured UNC Wilmington on the last day of the conference, we saw the in-plant’s work all over campus: on buses, in the student union building, on flagpoles. It was a great reminder of how much wide-format work awaits in-plants ambitious enough to go after it.

As for PRINTING United, I'm sure you'll see more than your share of coverage in the weeks ahead.