From the Editor: The Impact of Inflation on In-plants

By now the realities of inflation have sunk in for all of us. We know more about the supply chain than we ever have in our lives, but that’s not doing us much good. Supply costs still keep going up. How are in-plants coping?

As paper prices increase (and then increase again), some in-plants have raised their prices; others have tried, but their efforts have met with resistance. 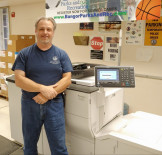 Walter Ryan, Print Shop foreman for the City of Bangor, poses next to his in-plant’s Ricoh Pro C5100s.

At the City of Bangor’s in-plant in central Maine, Walter Ryan told me he finally raised his rates after enduring multiple paper price increases, and he expects to have to do it again in a few months if prices continue to climb at the same pace.

“Interestingly enough, there has been no pushback so far,” he says. “I think part of that is because when many first heard about a paper supply shortage on the evening news, I made sure to address this immediately the next morning.”

At Kohler Co., in Wisconsin, Christopher Donlon says he raised his color impression rates by 10%, but has not touched monochrome prices because copy paper hasn’t risen as much as coated sheets. Customers aren’t complaining though, he adds, since his in-plant still offers the best prices in the area.

In Muncie, Indiana, Ken Johnson and his team at Ball State University check stock prices before estimating any job and update their pricing weekly.

“If the prices have gone up, we pass the increase along to the customer,” he reports. “We have not had any pushback, since everyone sees what is going on in their personal purchases.”

If he knows a job will take some time to be submitted, he adds a note to the quote:

“Due to the volatility of the paper marketplace, we are continually reviewing paper pricing. If an adjustment is necessary to reflect current paper prices at the time the order is placed, we will contact you before proceeding.”

Not every in-plant can be so fluid with its prices, however,

“I requested a 5% increase to my boss on stationery in June 2021, and it was rejected by his boss — even though I presented price increase documentation from paper vendors to more than justify it,” says Kevin Kelley, of Georgia State University, in Atlanta.

The inflation impact is slightly different for in-plants funded by a budget rather than chargebacks. At Arapahoe County’s in-plant, in Littleton, Colorado, Tim Mulvey says his paper costs have gone up between 30-60% over the past year, but because production is down 43%, he’s been able to stay within his budget. Since his shop is just a partial chargeback operation, the rise in paper costs is not as apparent to customers.

“I keep reminding my boss if production does increase, our current budget will not support the increase,” he says.

For some in-plants, inflation has not only impacted what they pay for materials, but has upped employee salary demands. In-plant staff that are considered “essential” and required to be on-site are asking for raises.

Kelley says an open manager position in his operation has gotten no realistic applicants after being posted twice, so discussions are in process to raise the pay $10,000 just to get better candidates.

At other in-plants, like Ball State, staff reductions are the only way to manage rising overhead costs. The shop reduced staff by two positions, and cut its student workers.

“With the losses we have suffered over the past two years we could not maintain the support we are getting from the budget office without showing that we are doing everything to make it back to profitable,” explains Johnson.

These are tough times for in-plants; getting through them intact will require a lot of creativity and a continual search for more ways to add value without adding costs.

Pantone Introduces Its 2023 Color of the Year
END_OF_DOCUMENT_TOKEN_TO_BE_REPLACED