“This machine can do just about everything,” he lauds.

That machine is a Canon varioPRINT iX3200 sheetfed inkjet press, and when it was installed in June, Iowa State University (ISU) became only the second university in-plant to implement an inkjet press. Thole, director of ISU Printing Services, has been impressed since day one. 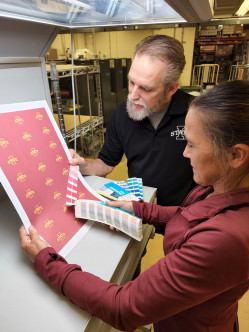 Renae Lowe and Marty Grapp check the output from the Canon varioPRINT iX3200.

“It allows us to do everything that we were doing before, so much faster,” he says — not to mention more efficiently and less costly. “I can print black on inkjet for less [cost] than I can on a dedicated black toner device now.”

This has greatly simplified workflow at the Ames, Iowa, in-plant, which is celebrating its 100th anniversary this year. No longer do operators have to route black-and-white and color pages to separate devices. The varioPRINT iX3200 can simply print them all.

Thole points to a large run of course materials the 24-employee shop recently printed. Traditionally, the color pages were printed on a Kodak NexPress SX3300 and the monochrome pages on a Konica Minolta bizhub 1250, then pages were hand-collated. Not anymore.

“We ran it all in one pass on this machine — at three times the speed — and we got the job done weeks ahead of when we said we were going to,” he boasts.

This is a phenomenal improvement and has made Thole eager to move even more work onto the inkjet press from the shop’s toner and offset presses.

“I’m looking to move the vast majority of our offset print to it,” he reveals.

It’s already a challenge to find operators for the in-plant’s Heidelberg Speedmaster 52, Thole says, and fewer jobs warrant offset printing these days. He estimates that jobs of up to 10,000 two-sided 11x17" pages will run more cost effectively on the varioPRINT iX3200 than on the Heidelberg.

Toner printing is also transitioning to inkjet, allowing Printing Services to decommission its NexPress, a Ricoh Pro C5100, and a Konica Minolta bizhub 1250.

“We’re just trying to get away from toner where we can because inkjet just seems to be so much more cost effective anymore, and faster,” Thole says. 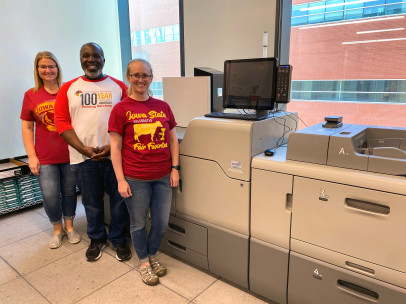 He admits replacing all this equipment with a single inkjet press was a daunting prospect.

“It was definitely an integral cog in the wheel of my learning about inkjet,” he says of the Summit.

Still, he can understand how other university in-plant managers may have trouble with the idea of replacing multiple devices with a single inkjet press. While in-plants at school districts, government agencies, and insurance companies are converting to inkjet in droves, only one other university in-plant — Brigham Young University — has implemented inkjet. Thole suspects many of his higher-ed peers don’t feel they have enough volume to support inkjet. While the varioPRINT iX3200 is rated for up to 10 million 8.5x11" impressions per month, ISU’s current volumes are closer to 10 million letter impressions per year. Thole expects that volume to grow, however.

The cost of the press is also likely a hurdle for higher-ed institutions, he surmises. ISU invested about $1 million, all told. But Thole intends to fully recover that cost in savings over the next 10 years, as he detailed in his proposal.

“I had to do a lot of math to justify this thing,” he says. 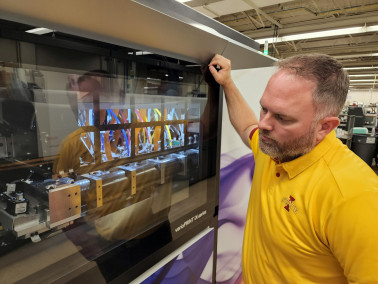 Director Nathan Thole watches the progress of pages through his in-plant’s new inkjet press. ISU is only the second university in-plant to install an inkjet press.

A Variety of Applications

While some higher-ed in-plants may feel they don’t have the appropriate mix of work for an inkjet press, ISU is running just about every application on the press: brochures, magazines, flyers with heavy ink coverage, curriculum materials, transactional statements, even stationery. This last item is a big deal for Thole, since the shop had not previously been able to print laser-safe stationery on its toner-based NexPress, forcing the in-plant to print it on offset. 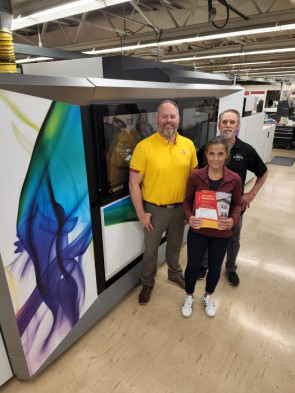 Unlike with early inkjet presses, the varioPRINT iX3200 can print on a variety of substrates: coated, uncoated, synthetic, carbonless, even magnetic. The press has eight paper trays to accommodate this variety.

Thole has been very impressed with the quality and color consistency of the printing coming off the press. Because the ink is absorbed by the sheet and doesn’t lay on top like toner, printed pieces take on the characteristics of the paper, whether coated or uncoated, instead of having the waxy look of toner.

The detail of the printing is excellent too, he says, noting one test print the shop did of a text page that used a one-point font. The letters were clearly legible under a loupe.

“I have no concerns with quality,” he says.

The varioPRINT iX3200 has brought numerous efficiencies to the in-plant, such as obviating the need to print and store shells. Thole likes that the press has minimal hands-on maintenance requirements and is very intuitive to operate. He trained on it alongside his operators and says they were able to run some live jobs on it just a week after installation started.

One reason for the smooth installation was that Thole and his team spent six months preparing for it. Thanks to Canon’s excellent guidance, he says, Printing Services and ISU’s Facilities team had the air compressor in place and met all the press’s electrical, exhaust, and water purification requirements.

Finishing is all done offline on the in-plant’s Duplo, Standard Horizon, and MBO equipment.

The varioPRINT iX3200 isn’t the only new equipment Printing Services has added. It installed a Ricoh Pro C7210 with 5th color capabilities in its satellite center, replacing a Ricoh Pro C5100. It also added an iJetColor Pro 1175P digital inkjet envelope printer. Envelopes were previously printed on a two-color Heidelberg QM46, but now they can be run full-color, full-bleed, and with variable data, Thole proclaims. He first saw the iJet at PRINTING United Expo in 2019, and hopes to attend the 2022 Expo in Las Vegas. 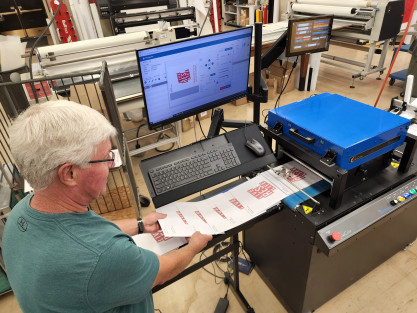 Printing Services has not started promoting the new Canon varioPRINT iX3200 yet, Thole says, but once it does, he expects volumes to increase. He also plans to market its capabilities to other universities and state and local government agencies. He intends to hold an open house in the fall to celebrate the in-plant’s 100-year anniversary and show off the new press’s capabilities.

“Inkjet is the future,” he proclaims. “I can’t think of a better time to get into it.”