This was a busy week of in-plant visits for me. On Tuesday and Wednesday I toured the in-plants at Yale University, the University of Bridgeport, Fairfield University and Sacred Heart University. What's more, I met with more than a dozen in-plant managers at the IPMA Road Show event hosted by Yale Printing and Publishing Services (YPPS) on Tuesday. 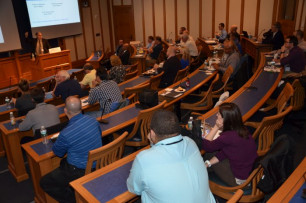 I drove up to New Haven, Conn., (enduring a monumental traffic jam on New York City's George Washington Bridge) and joined a roomful of managers inside Yale's Greenberg Conference Center. IPMA had organized a full agenda of educational presentations as well as a tour of Yale's in-plant.

Canon Solutions America started the day with an eye-opening talk on "Production Printing in Today’s Security Sensitive World" (a presentation recently covered in an IPG webinar, which I highly recommend you watch as a replay). Ricoh USA gave a primer on wide-format printing that detailed the characteristics and benefits of roll-fed, flatbed and hybrid systems, and the attractive ROI of wide-format. Kodak talked about its strategy for attracting and training the next generation of employees. 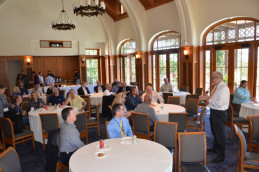 A speaker from the USPS addresses attendees during lunch.

But the best presentation came from YPPS Director Jeff Gworek, who detailed how he downsized and streamlined his in-plant from 70 employees in 2008 to today's 44-employee workforce. He noted how the in-plant helps Yale meet its sustainability goals (the shop is FSC certified, among other efforts), how it's focused on being more entrepreneurial to bring in new types of work (the in-plant now produces all the proofs needed by Yale Press, the university's publishing arm), and how he is constantly telling the in-plant's story to everyone he meets (both Yale's president and senior VP have toured the in-plant). 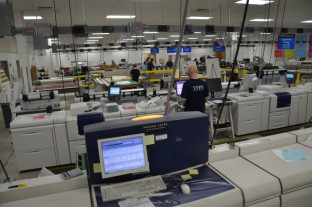 The group toured the very clean and orderly YPPS operation and was very impressed with its capabilities. Right at the shop's entrance, all the in-plants awards were on display, including its In-Print Best of Show trophy. Gworek showed off the app the in-plant created for the Yale School of Music and described the copier fleet management program the in-plant runs, which includes nearly 1,600 machines, all purchased by the in-plant and rented to various Yale departments. Between this program and others managed by the in-plant (e.g. postage meters, paper, promotional items), YPPS is saving the university $2 million a year, he said. 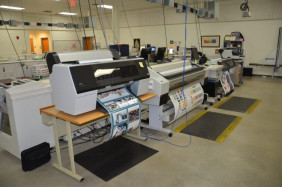 The in-plant's main digital color engines are a pair of Ricoh pro 7110 four- and five-color units with inline GBC punches. One is equipped to print white and clear ink. Its black-and-white printers include a Xerox Nuvera 144 and a D125. Most impressive was its array of four Epson wide-format printers, used to produce, among other items, shuttle bus signage. Between Monday and Tuesday, Gworek said, the printers had produce 70 wide-format prints and mounts. 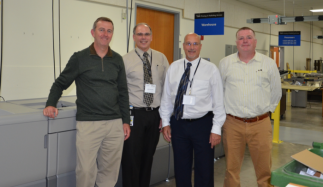 Gworek noted that in January the in-plant completely rearranged its equipment to improve its workflow. Now all the printers are at one end of the shop and work flows toward the bindery, mail and shipping areas. 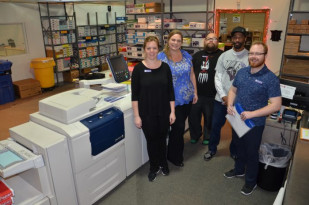 On Wednesday I visited three more in-plants, starting with the University of Bridgeport, where Esther Bessell van Winden, director of the Print and Mail Center, proudly showed me her five-employee operation, which uses a Xerox J75 and two Xerox D125s.

She manages the copier fleet of 54 machines and established a system where each copier has a "key operator" in the department using it, who is trained on the device's capabilities and also encourages people to send jobs of more than 50 pages to the in-plant. The fleet was downsized from 68 machines to 54, saving the university $250,000 over the life of the contract. Signs depicting the in-plant staff and listing all the in-plant's services hang on the walls by the copiers to help drive work to the in-plant.

Years ago the in-plant was run by an outside vendor, but when Bessell van Winden was hired five years ago, she was tasked with transitioning the operation to a university-run operation and expanding its services. 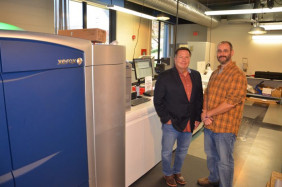 From there I made a short drive to Fairfield University, where I talked with Curtis Ebdon, senior director, Design & Digital Print. The in-plant (as noted in IPG's Nov. 2016 cover story) moved from a deficit of $52,000 in 2009 to saving more than $185,000 in 2016 after transitioning to a centralized marketing agency model in which design, printing, communications, PR, Web/digital marketing and video are all under one umbrella.

We talked about the many wide-format projects the in-plant is producing with its Canon printer (which it paid off in just six months), how the in-plant's new Neopost inserter is allowing it to bring more mailing jobs in-house to provide greater cost savings and how the in-plant handles all university print procurement. Ebdon told me about his plans to recruit a top graduate from a high school graphics program to work in the in-plant and receive free tuition as a perk. 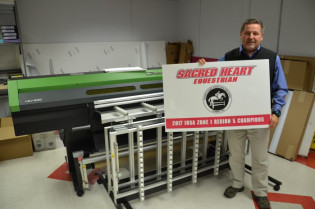 Art Gerckens, manager of Print and Delivery at Sacred Heart University, holds up an example of a sign printed by the in-plant on its Roland LEJ-640 hybrid wide-format printer.

I left Fairfield on a gorgeous fall afternoon and made a leisurely drive on winding roads to Sacred Heart University. There, Art Gerckens, manager of Print and Delivery, presented me with some surprising and wonderful news: just that morning his boss approved a plan to move the in-plant into a much larger facility on the university's new West Campus, in a building that had previously served as GE headquarters. The move will take place in January.

We took a quick tour of the current facility, which is predominantly a mail operation. Adding high density mailboxes a few years ago opened up lots of space for the in-plant. Student workers staff the desk where fellow students come to pick up their mail. In all, Gerckens told me, he employs a staggering 109 work-study students. 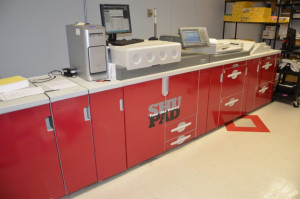 The digital print operation uses a Ricoh pro C901 and a Ricoh 8100, both of which were wrapped by Ricoh in Sacred Heart red. A decade ago, the in-plant did mostly black-and-white copying work, like exams and syllabi, but eight years ago Gerckens decided to up the quality by adding digital presses and providing higher-end printing. Today, the in-plant is one of the few that have earned G7 Master Qualification status.

The centerpiece of the in-plant, though, is the shop's Roland LEJ-640 hybrid wide-format printer, which it uses to print on substrates up to half an inch thick. The in-plant prints signs that are used all over campus. 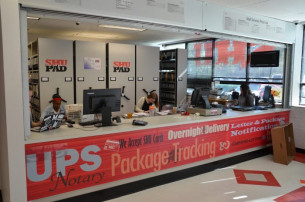 "Wide-format has been a home run," Gerckens told me. "We make a lot of money there."

Indeed, as I drove him to the new West Campus facility to view the in-plant's new location, he pointed out several campus signs printed by the in-plant. The new digs were very spacious, offering multiple opportunities to expand the operation. GE's in-plant had even left behind some small bindery equipment, which Gerckens is more than happy to start using. He said he plans to move both printing and faculty mail into the new location, and expand the student mail operation in the old facility. I look forward to hearing how it all turns out.

After we bid adieu, I hightailed it out of Connecticut, beating New York City rush hour and flying across the GW Bridge in minutes — which, compared to the hour I spent crossing it the day before, was nothing short of a miracle.

A Feather in Yale’s Cap

COLOR22 — A Color Management Conference for Everyone

Three New Challenges of the New Normal
END_OF_DOCUMENT_TOKEN_TO_BE_REPLACED
Upcoming Webinars
Print Outlook: What to Expect in the Year Ahead