I spent two days last week doing something I haven’t done in a long time: visiting in-plants. I took a drive to Harrisburg, Pennsylvania, and stopped in at five in-plants to see how things have been going.

I visited with the Dauphin County Library System, the Pennsylvania Department of General Services (DGS), Messiah University, Dickinson College, and Penn State Health. Two of the in-plants had inkjet presses; three had offset presses (though one has just been decommissioned and replaced by a new toner press).

The Library’s in-plant is just completing its move into a new facility, so I got a first look at that operation. I started there, in fact, in downtown Harrisburg, the state capital. Manager Rich Hoffner showed me both his old plant and the brightly lit new one, which he designed himself. It boasts a new Konica Minolta AccurioPress C4070, which he’s anxious to start using as soon as training is complete. The new location has both the print and mail equipment in one room, so he won’t have to walk jobs back and forth down a hallway any more. I also sat with Christina Lauver, marketing and PR manager, to learn about the Library’s expansion and renovation project, which was the reason for the in-plant’s move. More details to come on this new and improved operation. 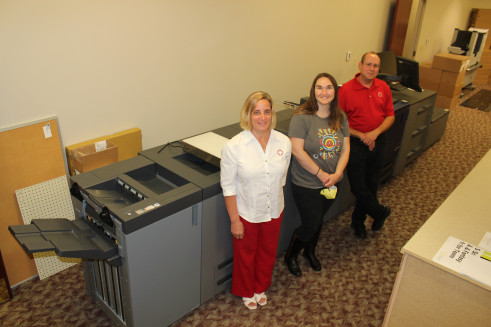 From there I took a short drive across the city to the Pennsylvania DGS shop, which I’ve visited twice before. Jeff Gensemer took me around the busy shop to see the roll-fed inkjet press in action and talk about some of the challenges the in-plant has been facing with getting stock due to supply chain issues. Paper and substrate shortages came up several times at the in-plants I visited. DGS, like other shops, has stocked up as much as possible, particularly with wide-format substrates, but paper vendors have told the shop flat out that it won’t be able to get all the rolls it needs, so it may have to move some of that work to its cutsheet printers. 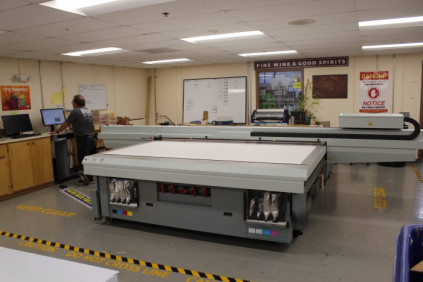 At Messiah University Press, I walked through the shop with Dwayne Magee and Bob Madden, seeing their new Epson CTP device, and learning that volumes in the shop are currently back up to where they were a decade ago due to increased insourcing and a resurgence in course pack work. One pandemic-inspired project that keeps the in-plant busy is putting together boxes of Messiah-branded items (hats, socks, etc.) to ship to prospective students who have been accepted to attend the university. This keeps the in-plant directly involved in the enrollment process. 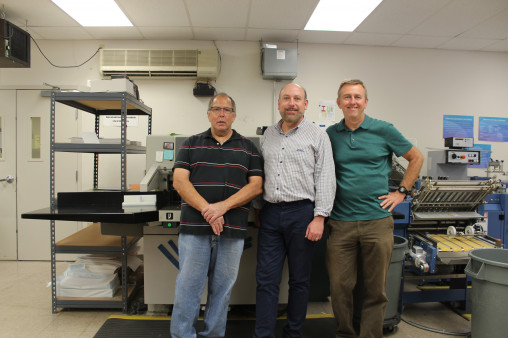 From there I headed west to Carlisle, Pa., to visit Ken Ball at the Dickinson College Print Center. His six-employee in-plant has it all, from its centerpiece Xerox iGen 5 to a pair of Epson wide-format printers. The shop handles bulk mail as well, with occasional large mailings of up to 33,000 pieces. Like Messiah, Dickinson’s in-plant has been assembling boxes filled with college-branded items to send to students and alumni. I learned that insourcing from local churches, restaurants and the YMCA provides the in-plant with almost half of its work. It also gets work from students, particularly posters for class projects, as well as theses. Though the shop has adequate paper supplies at the moment, Ken is monitoring a looming shortage of yellow toner for the iGen. 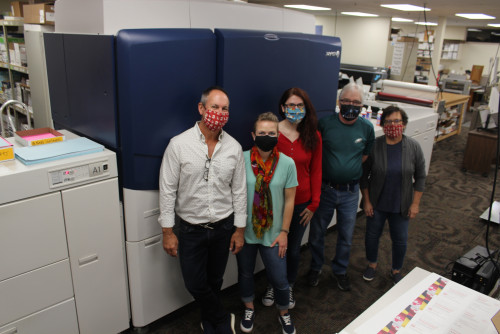 I wrapped up my tour of central Pennsylvania in-plants with a visit to Penn State Health in Hershey, an eight-employee operation that was one of the first in the country to install a Canon varioPRINT iX-series sheetfed inkjet press. Manager Craig Seybert took me around his shop, as the inkjet press pumped out page after page of color material for the health system. In fact, 90% of the shop’s work has now migrated to the inkjet press, though it keeps a Heidelberg Printmaster on hand to print envelopes. The inkjet press’ on-demand printing capabilities have brought a change to customers’ practices of printing large orders and warehousing them. I arrived a day after Canon technicians upgraded the press, replacing rollers and sensors, and Craig said it was running better than ever now. 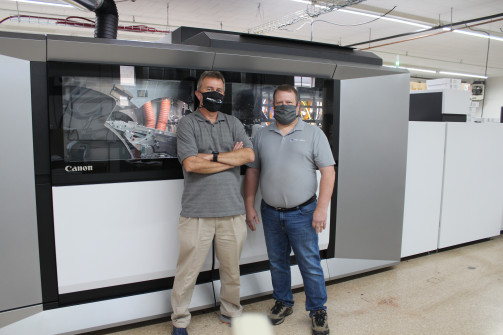 The in-plant’s toner presses, he said, now run mostly vinyl and polyester materials for hospital signage that needs to be wiped down and disinfected. (Wiping down inkjet-printed materials doesn’t work quite as well, he said, resulting in discolored signs.) The shop has plenty of space for its equipment, with a separate room for its stitching, creasing and inserting equipment, and a large warehouse area for paper storage. Craig told me it’s been taking longer to get some paper stocks, and he’s had to switch brands and even upgrade the stocks being used, which is impacting costs.

It was a whirlwind trip through central Pennsylvania, but I learned a lot about what’s been happening at these in-plants and how they’ve been dealing with COVID. Its effects continue to reverberate and make their lives more difficult, but all say their parent organizations appreciate their efforts and continue to give them strong support. 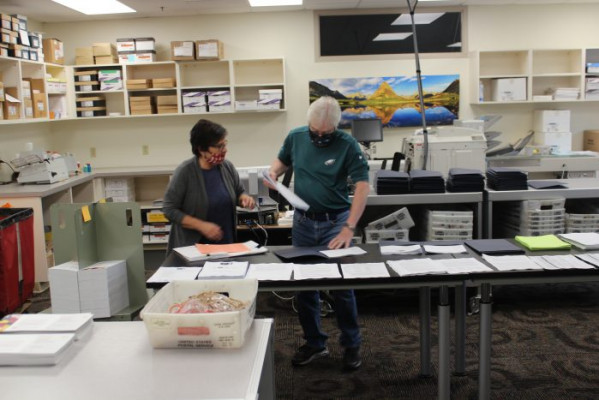 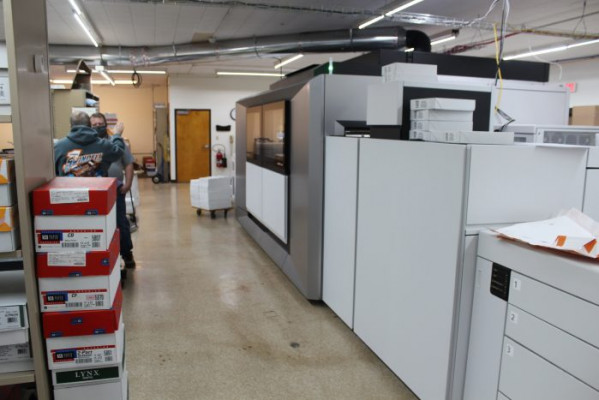 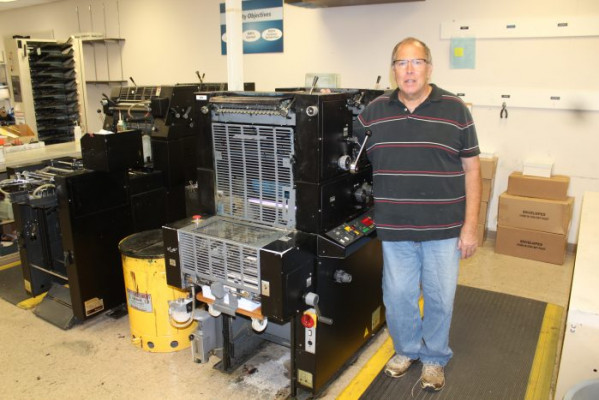 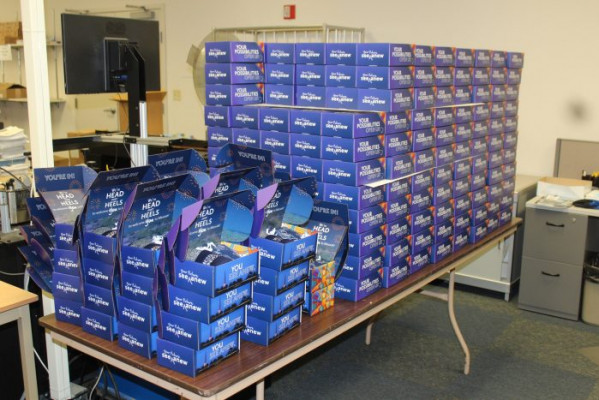 Some of the boxes being loaded with Messiah University items for accepted students. 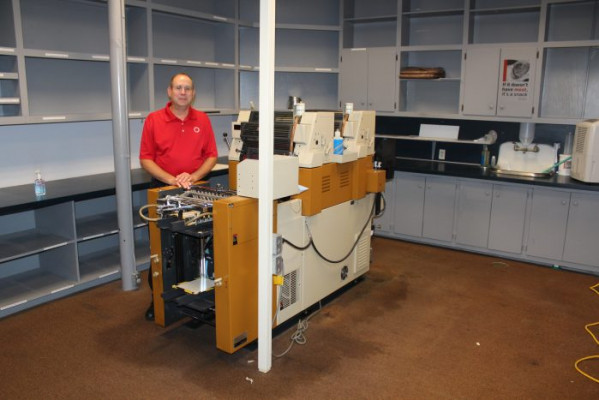 Rich Hoffner with his old offset press in the facility he is leaving behind.
0 Comments
END_OF_DOCUMENT_TOKEN_TO_BE_REPLACED

Detecting the Risk in Software Investments

END_OF_DOCUMENT_TOKEN_TO_BE_REPLACED
Subscribe
COVID-19 on In-plant Impressions
Reopening Of America: What Will This Look Like For Businesses Across The US

Greg Stecker will describe how his business grew from traditional offset toward high-margin display graphics.