Through hard work, late nights and an upbeat attitude, John Cruser has built Bloomberg’s in-plant into an award-winning model for other in-plants. 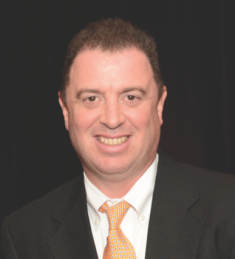 It was his debut print job in Bloomberg L.P.’s brand new in-plant. The company had been publishing a pair of weekly oil and gas industry reports for years, sending the work to a commercial printer, but in 1992 the decision was made to install a Xerox DocuTech and print them in-house to save money. Cruser, who had run a DocuTech at Princeton University’s in-plant, was hired to do the job.

But just as he was getting ready to print the reports in-house for the first time, the displaced commercial printer panicked Cruser’s boss with warnings: how could this kid with a copier produce the same quality that his company had been providing?

So his boss decided to have a showdown. Both Cruser and the commercial printer would print the same newsletters, and the editors would decide which looked better.

The day arrived, and Cruser, after working through the night, gathered his final copies. The commercial printer wheeled his in on a hand truck, then stepped out to get coffee. While he was away, Cruser wrote “offset” on the back of a sample of the vendor’s work and “DocuTech” on one of his pieces. The printer returned and, with Cruser’s boss watching, strutted confidently up to the table.

“He reaches over, past his, grabs mine and throws it on the table. He goes, ‘that’s offset printing,’” Cruser recalls. “I flipped it over. ‘That’s DocuTech.’ That’s the last time I ever saw that guy.”

And so began Cruser’s 27-year career at Bloomberg Ink, one of the most successful in-plants in the country — an in-plant he truly built up himself, from a one-person shop with a single black-and-white printer to the current award-winning operation, with a five-color offset press, multiple digital color printers and a cutting-edge flatbed printer. In all his time at Bloomberg, his drive to produce the best possible product has never waned, as evidenced by the in-plant’s back-to-back In-Print Best of Show awards.

A Printer by Chance

Like many in-plant managers, Cruser’s entry into the printing world happened by chance. Born in Trenton, N.J., he was taking classes at the technical school affiliated with nearby Hightstown High School in the early ’80s when fate intervened.

“I started out on the carpentry side, and one day they didn’t have enough work and they said ‘go over in the room next door and see the printing team,’” he recalls. There, he found the instructor trying to fix the ABDick press.

“I said, ‘I’m pretty good at tinkering with things; let me see if I can help.’ I ended up taking the machine apart and putting it back together and fixing it,” he says. “Before you know it, I was running it.”

By his sophomore year, he was taking printing full time, and working in the shop after school as well, printing materials for the school district.

After graduating in 1983, Cruser took a job with a small commercial print shop called Print-It, running a two-color Heidelberg and some copiers. But he had a bigger goal: to work at Princeton University, which was something of a family tradition. In 1986 that dream came true when he was hired as a delivery driver for Princeton’s in-plant.

“I worked in the bindery when I wasn’t in the van,” he says.

With years of press experience behind him, he longed to advance into the pressroom. His lucky break came after a press operator got a lucky break of his own.

“The guy who was running the Hamada hit the lottery for $2.7 million — which opened a slot up for me,” he says. It’s not clear who was more excited about their good fortune.

Cruser eventually moved on to run the Heidelberg GTO, which he did happily for many years — until the day Xerox asked Princeton to be a Beta test site for something called a DocuTech. Cruser recalls seeing a DocuTech printout of Princeton’s Tiger mascot with a rich black color and trying to replicate it on the GTO. It was extremely difficult to match it.

Impressed, he asked to be trained on the DocuTech, and was given a night shift position. Alone at night, without the Xerox engineers halting the device to make adjustments, he mastered the machine.

“That’s when I got all the work done,” he says.

A few miles away, Bloomberg had heard about the DocuTech as well. Eager to cut print costs on the Oil Buyer’s Guide and Natural Gas Report it was sending to a commercial printer each Thursday, the company purchased a Docu­Tech, then started looking for someone to run it. Cruser’s reputation preceded him, and before long he moved from his beloved Princeton to the global financial, software, data and media company founded by Michael Bloomberg, former mayor of New York City.

After winning the offset-versus-DocuTech showdown, Cruser got proficient at printing the weekly reports. Each Thursday, the editors would wait for the stock market to close, add that data to the reports and send Cruser the files at 6 p.m. Then he worked through the night to get them printed. Often that took until 11 a.m. But if the DocuTech was temperamental, he might not finish until 5 p.m. It was a gruelling schedule.

“I was young and crazy back then,” he laughs. “I could do all that.”

Soon, the fact that he only had one real day of printing began to bother him, so he started visiting Bloomberg departments, explaining what he could do for them and drumming up more business. He started printing user guides for Bloomberg’s software products, brochures and other short-run materials. As the in-plant got busier, he was able to hire a small staff.

In 2002 Cruser scored his biggest win to date: he was able to purchase a five-color 18x22˝ Sakurai with an aqueous coater.

“The marketing team wanted to get higher-end [materials],” he explains. “We were spending a lot of money outside.”

A financial analysis revealed that the in-plant would be able to recover the cost of the press in a year and four months with the cost savings it would provide. That estimate proved to be way off.

“We actually paid for the press in six months,” he proclaims, with just a touch of pride.

The in-plant had a growth spurt in the early 2000s and Cruser added a number of new employees. In 2006, the operation was moved to a new facility, which Cruser was able to design himself so that work flowed through efficiently. He put in a high-quality ventilation system to allow the offset and digital presses — which, by then, included an HP Indigo 7600 — to be situated side-by-side.

In 2008, the company’s need for on-demand printing in London and Asia prompted Cruser to suggest opening in-plants overseas. So between 2008 and 2012, print operations were opened in London, Hong Kong, Singapore and Tokyo. Eventually, Cruser was put in charge of all of them, a responsibility that has him travelling to these locations several times a year.

Asked what he’s most proud of about his operation, Cruser says it’s the high level of customer service his in-plant provides.

“We’ve always had this policy where we don’t say ‘no,’” he emphasizes. If customers request something too ambitious, he and his staff work with them to find a solution they will be happy with.

A big part of making them happy is providing excellent quality work, something Cruser is committed to doing. The in-plant posts its quality standards on the walls of the shop, for both customers and employees to see. To ensure operators take ownership of the quality of their work, he places two different people every day in charge of doing quality inspections of each finished job.

This dedication has won the in-plant a wall of In-Print and Gold Ink awards, which proudly hang in the hallway outside the in-plant.

“It’s done so much for my team, to be part of the [In-Print] and Gold Ink Awards,” Cruser says. The in-plant has also been selected twice by the In-plant Printing and Mailing Association as the Print Center of the Year.

Cruser’s enthusiasm for his job has not dwindled over time.

Cruser loves his company and can’t say enough good things about his coworkers.

“This place is just really amazing,” he praises. “The people here are phenomenal. I’m so thankful to be here.”

Outside of work, Cruser enjoys spending time at his vacation house at the New Jersey shore and taking his 1931 Model A Ford — souped up with a Corvette engine and frame — to car shows.

Related story: From the Editor: All the Right Things

Another Best of Show for Bloomberg