John Yerger: A Printer Through and Through 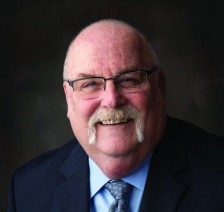 If anyone was preordained to be a printer, it’s John Yerger. Born into a family of printers stretching back generations, the director of Print, Copy, Merchandising, Mail & Distribution Services for the University of Nebraska-Lincoln was already working in his family’s print shop at just nine years of age.

“I would take the type out of the galley after we printed it and smelt it down, pour new pigs and take that back to our two Linotype operators,” recalls Yerger.

His family published and printed the Yazoo Herald, in Yazoo City, Miss., and Yerger assumed his work as a printer’s devil there would lead to a press operator’s job after he graduated from high school.

“I really thought I was going to grow up and stay in the family business, and start as a pressman and work my way up,” he says.

But his mother and uncle Norman saw a different future for him. After he graduated in 1971 they sent him off to Chowan College in Murfreesboro, N.C., noted for its printing program. While studying for his associates degree in printing management, he worked on the side for the Ahoskie Herald as a camera operator.

After graduating, Yerger went on to attend Arkansas State University, where he earned his Bachelor of Science in Communications, Printing Management. Both during and after his university experience, Yerger worked at Creative Multigraphics, in Jonesboro, Ark., first as a press operator and then as a salesman. He was eventually promoted to VP of sales and marketing, an opportunity that broadened his outlook immeasurably.

“It totally got me out of the pressroom,” he says. “It just opened up a whole new avenue of learning.”

He joined the Sales and Marketing Association of Northeast Arkansas, and was soon elected its VP and later, president. There he mingled with marketing leaders and gained insights into business management.

After 18 years at Creative Multigraphics, Yerger took the VP of sales and marketing job at Printers and Publishers, in Leachville, Ark., which produced 1,400-page directories for the floral industry. He soon became general manager and COO of the operation, which functioned as an in-plant for its parent corporation.

“It was my first real in-plant experience,” he notes. It would not be his last.

The Power of Digital Print

After five years there, Yerger moved on to Design Printing, in Memphis, Tenn. As production manager there, he learned about the power of digital printing when the company added two Xerox DocuTechs, and he saw how they were able to churn out work six days a week. This knowledge made an impact on him, and when Yerger accepted the print director’s position at the University of Arkansas-Little Rock in 1996, he wasted no time installing a DocuTech there and bringing digital printing to the university.

Yerger made other changes there as well. He started offering four-color printing on the shop’s two-color ABDick presses and he expanded the in-plant’s clientele to include state agencies and the university medical center. This tripled the in-plant’s revenues over the five years he was there.

In 2001, pursuing what he thought would be a great opportunity, Yerger started up a trade printing operation specializing in digital and variable data printing. The recession thwarted his plans, slowing business and leading him to merge with another company in 2006.

In 2011, Yerger suffered a major heart attack, which required six bypasses. Around that time he also met and married his wife Loretta. The two milestones in his life led to his decision to retire and move to Missouri. He and his wife spent two years traveling around in their RV, until Yerger came to a realization: he missed the printing business.

“I was just bored,” he admits.

So he scoured the Web looking for a new opportunity. He found it in Nacogdoches, Texas, where Stephen F. Austin State University Printing Services was seeking a director.

That operation had been losing money for years, so Yerger went right to work. He began preparing monthly profit and loss reports to better control inventory levels and reduce overbuying; he targeted customers who had been buying off-campus and convinced them to bring their work back to the in-plant; he expanded direct mail, variable printing and fulfillment services; he also coordinated the installation of a Kodak NexPress SX3300. As a result of these efforts, the in-plant was named the 2014 Print Center of the Year by the In-plant Printing and Mailing Association (IPMA).

In January of 2016, Yerger was named director of the University of Nebraska-Lincoln’s in-plant.

As he did at past operations, Yerger started out by reviewing the in-plant, the staff, and the policies to understand what was working and what wasn’t, then formulated a plan of action. After talking to the staff and learning their strengths, he moved some of them into new roles to take advantage of those strengths. He notes that he always tries to motivate employees by praising them, and never disciplines them in front of others.

Observing that the in-plant needed to expand its presence with customers, Yerger added a customer service representative to the team of three, and encouraged them all to act more as salespeople, visiting customers and pursuing new business.

Yerger has approved a number of technology upgrades in the past couple of years — a Xanté digital envelope press, Canon imagePRESS 8000 and 10000 digital presses, Bell + Howell inserters, and imposition and VDP software. By adding a laminator, the wide-format operation was able to move beyond posters and start mounting to foam core and Coroplast.

“It actually expanded our market quiet a bit,” he reports.

Topping all of these equipment additions, however, was the installation of a six-color, 40˝ Manroland 706 PLV HiPrint perfecter press with an aqueous coater. The press has been so busy since it started running in August 2019 that the in-plant had to add four additional employees, bringing its staff count up to 51, with three additional new hires in the plans.

That press, along with all the in-plant’s digital color devices, has been calibrated to Idealliance G7 specifications, a move Yerger strongly supports to enable the in-plant to print consistent color with confidence.

“We needed to have consistency on press,” he remarks. “It has made a tremendous difference.”

Yerger is looking forward to showing off the new press and the rest of his operation when the Association of College and University Printers (ACUP) conference comes to town June 28 - July 2 (the conference, like many, was rescheduled to to coronavirus concerns). He attends both ACUP and IPMA conferences and urges other managers to do the same, to learn from their peers.

Training is important to Yerger, and he encourages his employees to pursue training opportunities.

“A good leader develops the leader to take his place, and you can only do that if you help teach and guide that person, and the person below him,” he declares.

Thanks to the changes he has implemented, the in-plant was honored with a 2017 Best of Lincoln award from the Lincoln Award Program, which salutes local businesses that achieve exceptional marketing and service success.

When he’s not at work, Yerger says, “I just enjoy life with my wife.” He also loves spending time with the couple’s four children and nine grandchildren.