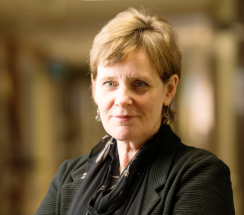 Despite her 33-year tenure at the University of Washington’s in-plant, Katy Folk-Way admits she never intended to work in the printing industry.

“I love print. I love reading. I love the way books are cut,” says the director of UW Creative Communications. “But I never thought I’d have a career in printing.”

Printing isn’t the only passion she’s discovered in her professional journey; having worn different hats in her department at UW, Folk-Way developed a strong affinity for human resources.

“My love, other than the fantastic world of printing ... is working with people and finding the right niches for people,” she says.

After 10 years in Humboldt County, she continued to make her way north, spending four months in Portland, Oregon, before ultimately moving to Seattle in 1987. Two years later, she was bartending at a restaurant when a college friend informed her of a copy center supervisor position at UW.

“I was looking for a job, and the idea of getting my foot in the door at the university was very appealing,” she says. “So, I took the job at the copy center and never left.”

Within six months, Folk-Way was working in the front office helping the manager oversee UW’s 17 copy centers at the time. A year later, she was asked to apply for a program operations manager position through which she became involved in HR for 14 years. Then, as Folk-Way notes, one thing led to another and nine jobs later she took on her current director role.

Despite the fact that UW departments are free to use off-campus print providers, Folk-Way is proud to note that more than 94% of UW’s print business comes to the in-plant.

“Our customer service scores are off the charts,” she says. One reason is that UW Creative Communications always says yes, whether it’s to late requests, or to helping provide PPE for the campus. While the in-plant markets its services internally and holds open houses, vendors have also referred its services, which led to the operation doing work for three hospitals affiliated with UW and Seattle Children’s Hospital at the start of the pandemic.

Folk-Way is proud of the efforts her department has made to be more sustainable.

“Living in this area, people are really environmentally focused,” she says. “We do a lot in our department to really stay ahead of that.”

This has included using 100% recycled paper, before it became a state mandate. While it still sells other paper products, the operation errs on the side of caution and offers eco-friendly alternatives when working with customers.

Folk-Way has also been instrumental in implementing lean practices in the in-plant, having become a lean coach in the process. On the heels of the recession — and several layoffs in her department — Folk-Way learned a lean consultant was being brought into the university to work with different teams. Though her department wasn’t deemed as pertinent to the university’s mission, Folk-Way continued to advocate for her team, and eventually got a meeting.

“So, in 2010, we started doing lean process improvement and it really changed our whole department,” she says. “It’s not just managers trying to figure out how to change the departments, it’s every person at every job figuring out how things can run more smoothly; it’s pretty powerful.”

As a result of these efforts, Folk-Way has coached other teams on campus, and other universities have been brought in to see UW’s operations.

It was these lean approaches that led to another major, and sustainable, development for the in-plant. As teams meet regularly to discuss goals and ideas, the suggestion for a bike delivery system came up to address how delivery vehicles were getting stuck in campus traffic. Folk-Way and former director Frank Davis coordinated the introduction of bicycle delivery services in 2015, starting with five bikes and cargo carriers. This initiative has further evolved as Mailing Services applied for a grant to start using e-bikes. Eight e-bikes now distribute all of the in-plant’s print, though there are still trucks that deliver to the outskirts of campus and to UW’s other campuses. Even when Seattle experienced record high temperatures the past two summers, the bike messengers handled the morning deliveries.

When it comes to these accomplishments, she is quick to credit her team. Ensuring her employees have input, and are following their passions, is a priority for Folk-Way. She shares the story of a delivery employee whom she knew wanted to become an accountant. Due to an injury, the employee was going to be home on leave and eventually go without pay. Folk-Way instead worked with the accounting manager to have the employee assist with data entry. The employee has not only received multiple promotions in accounting, but also received her bachelor’s degree.

Folk-Way’s focus on helping others extends beyond the print shop. As co-chair of the UW Medical Center’s Intensive Care Unit Patient and Family Advisory Council, she and her husband co-created a volunteer program that visits rooms in the ICU to help patients and families with various needs, such as navigating where to get food in the middle of the night. The program grew from three to 18 volunteers, though it has yet to reopen since the start of the pandemic.

It was this work, and her contributions to the university, that ultimately earned Folk-Way the UW Distinguished Staff Award in 2015 — an award she proudly says has been bestowed upon five employees in her department.

She first became involved in hospital volunteer work due to the amazing care she says her first husband, Kim Folk, received before his passing. It was ultimately how she met her current husband, Terry Way, with whom she recently celebrated 16 years of marriage. In addition to her two daughters (and a first grandchild on the way), she has four stepchildren and nine step-grandchildren. The couple also officially adopted a son, who had lived with them from age 17 through college.

“I have a very full life,” says Folk-Way.

Looking ahead, Folk-Way hopes to see the in-plant break even — after a couple of tough financial years during the pandemic — before she retires. She knows, however, with her senior management team in place, the in-plant will be in good hands when she leaves.

In the meantime, Folk-Way is always ready to listen and help her employees, and ensure they’re also proud of what they’re doing.

“[Though] my door is always closed because of COVID, people know they can come by anytime,” she says.