It took several years between Mayo Clinic’s decision to get an inkjet press and its installation in October, but the success of the outcome has validated the pace of the effort.

For the past 10 years, the Print Production Unit of the Mayo Clinic in Rochester, Minn., has been in expansion mode: upgrading its equipment, broadening its capabilities, extending its menu of customer services, and increasing its commitment to lean manufacturing. These smart moves have delivered solid results — but the in-plant’s latest leap forward may well prove to be the most consequential of all. 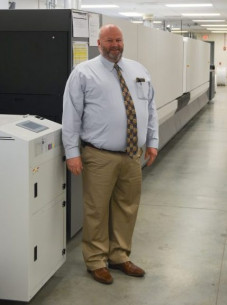 Mayo Clinic Print Production Supervisor Bret Johnson shows off his in-plant’s new inkjet press, which he describes as “the only way for us to get to affordable color, and remain viable.”

That would be the recent installation of a production inkjet press, a long-planned step that Print Production Unit Manager Bret Johnson describes as “the only way for us to get to affordable color, and remain viable for the type of work we do for our clientele.” He expects the device to transform the shop’s print production workflow, reducing outsourcing and saving the parent organization money in the process.

To avoid appearing to endorse a product or a brand, the Mayo Clinic has declined to identify the equipment. It is a high-volume, full-color, roll-fed press that Johnson and his team began installing last October and put into full production in February.

Also installed were a dynamic perforating system and a saddle stitcher, both operating fully in-line with the press. The plan, says Johnson, calls for “onboarding work slowly” and printing on a limited number of substrates while the shop explores what its new integrated production line can do.

The volume will consist of transactional printing at first and then expand to include the shop’s other two main categories of work, patient education materials and research-related printing. One of the main objectives, according to Johnson, is to replace shells — partially preprinted documents that get additional content in a second pass on another press — with white-paper-in, single-pass color printing on the inkjet press.

The shop stocks about 50 such shells for saddle-stitched patient education booklets, and Johnson wants the new press to make all of them obsolete.

“We purchased it with the intention of eliminating shells,” he says. 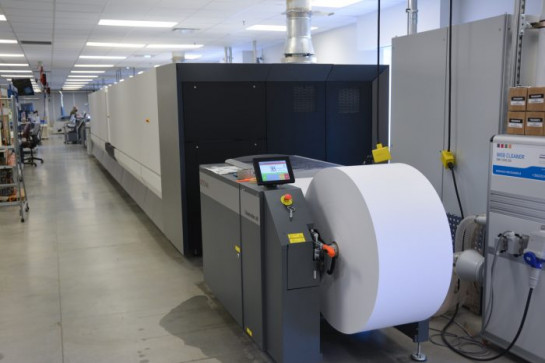 He expects that eventually, about half of what goes on the press will contain variable data, enabling the shop to produce complex mailings, color brochures, and other items “at affordable cost and efficient speeds.” Johnson adds that the high capacity of the press “opens our thresholds up” to longer runs that, before now, the shop was obliged to outsource. That saves the Mayo Clinic both time and money, not least of all by eliminating the rush charges that outsourced work often incurs. 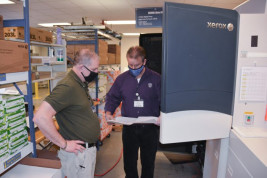 Lanny Evans (left) and Rick Irish confer about a job being run on one of the Mayo Clinic Print Production Unit’s color toner production printers.

The anticipated benefits don’t end there. The installation will also let the Print Production Unit begin to retire pieces of existing equipment whose work the new press can absorb. Johnson says that instead of the seven digital presses the shop now operates, the total footprint will be the roll-fed inkjet press, two black toner devices, and two production color toner printers. Reconfiguring the equipment list in this way will eliminate five older black toner presses that were either taken out or replaced with newer models.

The speed and efficiency of the inkjet press should also bring more flexibility to staffing, an issue for every in-plant functioning with retirement-age employees who can’t easily be replaced when they leave. The advantage here, says Johnson, lies in the fact that, with the new press and its supporting equipment, “some of our work takes about 20% of the time it used to take, and that helps us to do different things with that staff and that production.”

The Print Production Unit’s carefully plotted journey to production inkjet printing began in 2017 when Johnson attended his first Inkjet Summit, a high-level conference for current and prospective inkjet users. Other members of the unit followed him, and by late 2019, the group had narrowed the list of potential vendors it screened at the events. They made the final selection in early 2020, just as the COVID-19 pandemic was starting to take hold — a development that delayed installation until October of that year. 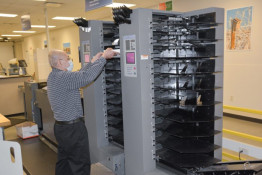 Virasmey Ma fills one of the bins on the collator.

Four years from concept to live production is a long time, but Johnson and his panel were meticulous in their due diligence. He spent 20 years as a field service technician for Xerox before joining the Mayo Clinic in-plant in 2008, and that experience guided him in planning, researching, and justifying the investment.

“I’ve been a service guy all my life. Customer service is in my blood, and it makes me a different type of customer” for the vendors to persuade, he observes.

The OEMs competing for the order had to demonstrate that their candidate presses could run the in-plant’s job files without tweaking on the stocks the shop routinely uses. Johnson and his team reality-checked the manufacturers’ claims by visiting six customer sites unaccompanied by vendor personnel. In these inspection tours, they asked about press performance and, Johnson emphasizes, the vendors’ reputations for service and support. 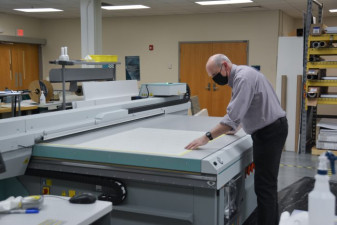 In the in-plant’s wide-format area, Brian Hindal sets up a job on the UV flatbed printer.

Then, there was management to win over. The Mayo Clinic, notes Johnson, has “a very robust committee system” for reviewing proposals of this kind. To stand up to the scrutiny, he and his team spent six months building a data-rich business plan for the press that the deciders spent another month and a half going over. Johnson says a strong point in the machine’s favor was the fact that it can be upgraded and expanded in place. This allayed concerns about the cost of replacing obsolescent digital equipment.

Now that the device is fully up and running, the investment is starting to look like an astute one. Color reproduction is both accurate and affordable, enabling the in-plant to start transitioning black-and-white and grayscale documents to color at an attractive price. Johnson says that paper testing has left the shop feeling confident that the press can handle matte, gloss, coated, and offset stocks.

Whenever an in-plant adopts a wholly new technology, learning curves come with it. Johnson says that “a big a-ha” for the Print Production Unit was realizing that the estimated cost of installing an electrical system for the press would be only about one-third of what actually had to be spent. Equipment needed to be moved in order to accommodate the press and its in-line finishing assets.

“Space and power were a big deal,” Johnson recalls. 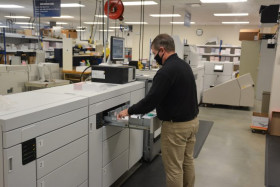 Chad Inglett loads paper into one of the in-plant’s four remaining toner devices.

Toner press and inserter operators trained to run the new inkjet press found the in-line finishing “the most intimidating portion” of the setup to learn, according to Johnson. Training them first on the press, and then on the perfing line and the saddle stitcher as they were installed, wasn’t satisfactory. The intervals between the training sessions were too long, and the learning process had to start over again from the beginning once all of the pieces were fully integrated.

Johnson notes that this was just one part of the challenge of changing from a strictly sheetfed environment to one in which a roll-fed press, for the first time, would be the center of attention. Now the in-plant needed to figure out roll handling and just-in-time inventorying in keeping with its lean manufacturing practices. Operators had to evolve from a one-job-at-a-time sheetfed mindset — which Johnson expresses as “the job is here, run it” — to the habit of batching jobs in extended roll-fed runs.

It was also essential to master front-end data management. “How the workflow feeds the device is probably the biggest challenge,” Johnson says. “You’ve got to get it set up to work with roll-fed.” Changing vendors, he adds, means new job submission routines, different RIPs, and re-integration with MIS and other software.

“That was an obstacle for us,” he acknowledges. 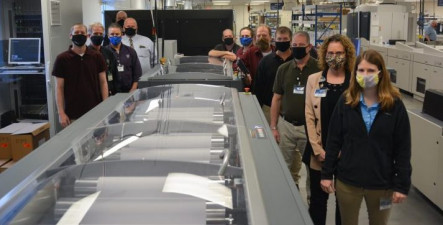 What the Doctor Ordered

But, overcoming obstacles is all in a day’s work for the Mayo Clinic’s Print Production Unit, which Johnson took over as manager last December after the retirement of long-time Senior Manager Jon Bedsted. A two-shift operation that employs 45 people, the in-plant produces 40 million pages per year in what is now effectively an all-digital environment. (The shop’s one remaining offset press was shut down during the first year of the pandemic and “doesn’t run very often” nowadays, according to Johnson.) The in-plant also has a clutch of wide-format and flatbed printers that it uses to produce wall graphics and signage for hospitals in the Mayo Clinic network.

High-volume production inkjet is an appropriate process for an in-plant serving a parent organization with $14 billion in annual revenues, 65,000 employees, a five-state footprint, and a mission to care for more than one million people a year. Johnson is proud of having played a lead role in bringing it to the Mayo Clinic’s Print Production Unit.

“We’re excited about it,” he says. “I think it’s a great step forward. It wasn’t ‘should we go into inkjet?’ It was ‘when?’ And then it was, ‘why not?’ You’re either going to do it, or you’re going to get swallowed up by somebody that did do it.”

University of Pittsburgh Embraces the ‘Effects’ of Change

Hot Products for the Bindery