Mike Lloyd: A Sense of Direction 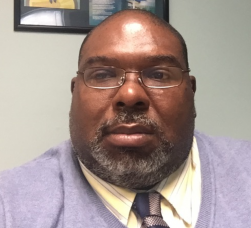 Mike Lloyd has come a long way since his days of running a press at a Chicago printing company in the 1980s. After working his way up through the ranks for the past 36 years, including a stint in the military, he now serves as director of Campus Support Services at the University of North Carolina, Wilmington (UNCW), overseeing a staff of 43 at seven different campus departments. These include not only Printing Services, Seahawk Mail, and the copier program, but other units like campus recycling, surplus properties, warehouse services, passport services, hospitality properties, and vending services.

Though he’s deeply involved with all of them, printing is still his passion, after spending so much of his career in the graphic arts.

“We’re not just a print shop, we are a print solution,” he says, with pride. “We do everything from vehicle wraps to signage to press. We do it all within our location.”

A busy man (he’s both a preacher and a football coach on the side), Lloyd places a high value on communication with his staff and meets regularly with his leadership team to strategize and improve the operations.

“Everybody has a voice,” he declares.

Born on Chicago’s south side (he’s still a White Sox fan), Lloyd got his introduction to printing at Dunbar Vocational High School, where he learned to run a Heidelberg letterpress, develop film in the darkroom, and do color separations. Something about the printing process captivated him.

“Taking a canvas that had nothing [on it] and creating a work of art,” he reflects. “It’s something that kind of just drew me.”

After graduating in 1985, he went on to attend Kennedy-King College at night, majoring in graphic arts.

“At the same time, I was working a full-time job at Newport Press as a press operator,” he says.

In 1987, Lloyd made a complete change in direction when he enlisted in the U.S. Marine Corps.

“I just wanted a change,” he explains. He certainly got that four years later when he served in the Gulf War and became a combat veteran.

Lloyd’s time in the military brought another big change to his life when he married his wife Rachel and had children. Stationed at Camp Lejeune in Jacksonville, North Carolina, Lloyd would go on road trips with his wife to Wilmington, an hour south, and they fell in love with the area.

“My wife said, ‘this would be a beautiful city to live in and raise kids,’” he recalls.

Though he was contemplating reenlisting, he sent a few resumes out to printing companies around the state. One day he got home from work in time to grab the phone and learned the owner of an AlphaGraphics franchise was interviewing. In full uniform, Lloyd jumped in his car and made the long drive south. He got the job. That job entailed building the print shop from the ground up. He installed all the equipment, then ran production.

Civilian life in Wilmington was a lot different from his younger years in Chicago.

“It was a huge change,” he says. The pace was slower, the roads were less clogged with traffic, and most importantly, the weather was warmer.

“We knew that, after spending a couple winters in North Carolina, we were never going back up north,” he says.

Of course, that meant not seeing their family as often, but the couple soon found a church they loved — Faith Temple Church of God in Christ — and “the church became our family,” Lloyd says. “We’re very active as a family in the church.”

He now serves as an elder in the church and a teacher.

In 1994, Lloyd left AlphaGraphics to work as a production supervisor at UNCW, a job that paid less but offered better potential, he says. He had soon advanced to assistant manager of the print shop.

In 2000, he was asked to oversee the postal services operation on an interim basis. He had his work cut out for him.

“We were doing cash transactions with a 10-digit calculator and a cash box,” he recalls. He quickly set about modernizing and automating the operation, greatly improving its performance.

“I took an operation that actually needed a sense of direction and grew that operation to being a flagship operation on our campus,” he says.

“Networking is extremely important because it gives you the opportunity to learn what other institutions are doing, but also allows you to keep abreast of the trends,” he says.

Lloyd’s success at restructuring the postal operation was recognized, and in 2007 he was put in charge of both print and mail, as well as passport services. At the time, the print shop did 90% of its work on offset presses and had only black-and-white digital devices. Lloyd knew the future was digital and that he would have to make changes.

“If you don’t keep up with the trends, the trends will pass you by,” he says. He felt the in-plant’s future was at stake.

“We had a huge deficit,” he reveals. “It was either turn it around or probably it would be outsourced.”

Making changes meant getting buy-in from staff, some of whom were skeptical, he acknowledges. And some customers were wary of the shop as well, due to past bad experiences. Lloyd was committed to changing all that. He told staff, “Let’s change the mindset, and let’s win each customer over, one job at a time.”

From Negative to Positive

He brought in digital color presses, including wide-format equipment, to improve turnaround time and efficiency. He did away with the rush charge the in-plant had always tacked onto last-minute jobs, to help foster better customer relations. He realigned staff positions to better play to employees’ strengths.

“During that first year, we went from a huge negative to a positive,” he says. “Once I got buy-in and the team recognized the results, it was an easy process going forward.”

The university noticed the in-plant’s successful transformation and the cost savings Lloyd had brought about, and in 2015 rewarded him with a promotion to his current position of director of Campus Support Services. In that role, Lloyd never stops looking for ways to improve the various departments under his watch.

“I’m constantly meeting, planning, and strategizing with my leadership team,” he notes. He meets frequently with his managers, and each month brings all 43 employees together.

“Everybody has an opportunity to say something,” he says.

Lloyd has strived to put people in “situations of success,” where they can excel.

“I want every staff member to be happy and satisfied at their jobs,” he says.

Giving employees more ownership of their work, he feels, has contributed to their longevity on staff, something that makes him proud.

“We have not had a lot of turnover,” he says. “We have continually grown and changed. Our guys now are looking for the next level: what can we do to make it bigger and better?”

Lloyd has received several awards for his accomplishments at UNCW over the years. He was honored with the 2007 UNCW Staff Award for Excellence, and that same year won the Governor’s Award for Excellence, the highest honor a state employee is eligible to receive. In 2015, CUMSA chose him as Manager of the Year. He’s also a North Carolina Certified Public Manager and has completed the USPS Executive Mail Center Manager course.

“It’s more of a ministry to me, because it allows me to interact with kids and families to set an example,” he says. “But it’s also something that I enjoy to do.”

Three New Challenges of the New Normal
Reopening Of America: What Will This Look Like For Businesses Across The US
END_OF_DOCUMENT_TOKEN_TO_BE_REPLACED
Upcoming Webinars
Turn Data into Dollars