Adding a Mimaki flatbed printer has allowed The University of Texas at Austin to branch out into non-traditional lines of work, enhancing the in-plant’s value.

Space was limited, so a small footprint was essential. That’s one thing Richard Beto knew for sure when he started making plans to add flatbed inkjet printing to his in-plant’s portfolio of wide-format equipment at The University of Texas at Austin. The new machine, a Mimaki JFX200-2513EX printer, installed in January, seems to be the right fit.

“On the floor at PRINTING United,” he says, “I saw things I thought we could do and sell.”

While he shopped equipment from several flatbed manufacturers, Beto says the Mimaki unit was at the top of his list, given its footprint, its price point, and the strong recommendations of in-plant colleagues from Ohio University, the University of Alabama, and Texas Tech University Health Sciences Center. Further, the flatbed — the in-plant’s first Mimaki machine — complemented its existing Colex cutter.

The move to acquire a flatbed, Beto says, was driven by a people-focused production bottleneck. Mounting substrate to rigid boards was slowing production. Not only has that bottleneck been eliminated, Beto says, “clearly, we can do a lot more things we weren’t capable of before.”

Not only did the new Mimaki JFX200-2513EX flatbed printer fit in the space UT Austin had available, it has also fit the university’s needs for sign production and much more.

While the ability to print directly to rigid board has been liberating, the in-plant is exploring other opportunities, including printing on leather pad-folios, for which jigs have been created to facilitate item alignment. Beto says it is not uncommon for someone from the university to ask if the shop has items that can be branded, to be used as donor gifts.

“When we started with the flatbed,” he says, “we fell back to things we’ve already done. Now we’re branching out.”

The shop is utilizing the flatbed to produce directional and event signage. Beto says during graduation, a lot of signage is produced to ensure people are being sent in the right direction. Further, the flatbed is being used to print directly onto acrylic or Plexiglas, then installed to walls using stand-offs, to create permanent signage for museum displays. While the campus also has a designated sign shop, he says the highly decentralized nature of the university means Document Solutions can take on any work it wishes, and neither entity has first right of refusal over sign production.

“The sign shop doesn’t have a flatbed,” Beto notes, “so they don’t have some capabilities.”

For print finishing, Beto says the Colex cutter is doing well to fulfill current needs, and he doesn’t plan to consider another equipment purchase until next fiscal year.

Located about six miles from the university’s campus, Document Solutions is similar to many university in-plants, but also quite different.

“We have tried to weave our way into the fabric of the institution by doing non-traditional things,” Beto explains. Among these things is being an authorized state printer, doing check printing in a secured area, and providing courier services and bank bag delivery to a variety of locations.

Beto started at UT Austin in 2004 and worked then to bring wide-format printing into the shop a year or so later. Prior to that, he says, the in-plant did not offer these services.

By installing the flatbed printer, the in-plant has not only added new capabilities, but has added value, and Beto believes the new capability has kept customers from looking off-campus for this type of work. 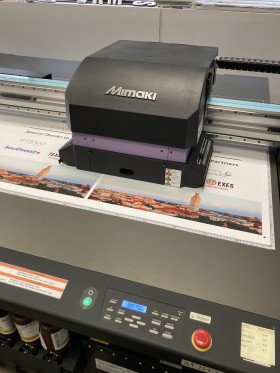 “We’re easier to work with,” he adds.

In addition to the newly acquired flatbed, the shop runs two other wide-format devices: an HP 365 latex printer, which the in-plant can use for numerous applications, including some fabric printing; and an HP PageWide XL4500, which gets a lot of use printing presentation posters for students. During COVID, these machines were used extensively to produce needed advisory and directional elements, including window and floor graphics. The latex printer was also used to print fabric backdrops that were then shipped to remote staff. These backdrops provided a consistent, branded look for those conducting university business online.

Beto says that while the in-plant is struggling with its current paper supply, he has had no issues acquiring wide-format related substrates.

Beto says Mimaki provided three days of training on the JFX200-2513EX, and his staff quickly took to the new device.

“I’m really fortunate to have a staff that embraces the idea that if I drag something in there, I know somebody is going to learn it,” he says. With the flatbed, that “somebody” was Greg Hitchens, the shop’s electronic prepress technician. Hitchens says faster production of rigid signs, where the need for mounting is eliminated, has been beneficial. He adds that this process is also producing less waste, reducing the shop’s environmental footprint.

Hitchens says the shop has been doing “lots of foamcore signs.” He says this and other work has kept the flatbed printer running, which is good for revenue. Other materials used include Coroplast, Gatorboard, and acrylic. For some applications, he has even utilized leftover cut sheets from the shop’s offset department.

“We have to use an oscillating blade on the cutter to saw through it,” he says. In doing so, he adds, the inkset can chip, making successful printing of Gatorboard signage with a full bleed somewhat of a challenge. Hitchens says he has addressed the issue by cutting the material to size in advance, then printing full-bleed, using blue painter’s tape to keep edge overspray away from the machine’s platen.

The enthusiasm with which The University of Texas at Austin team views its new Mimaki flatbed unit is a strong testament to the value new technologies can bring to in-plant operations. In sourcing the new machine, Beto benefited from the experience of other university in-plant managers. Further, he took full advantage of the annual PRINTING United Expo, which provides the widest choice of technologies and solutions for in-plants and companies across the printing spectrum. This year’s event takes place October 19-21 in Las Vegas, Nevada. Beto highly recommends the show to any in-plant interested in seeing the latest technology.

“It’s almost committing a sin to miss that event,” he says.