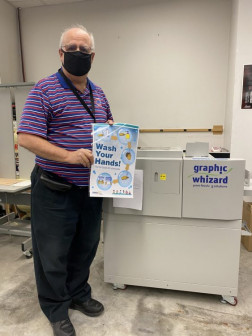 Steve Priesman displays a sample of what the Omaha Public Schools in-plant can laminate with the help of its Graphic Whizard PT33LSC.

Steve Priesman admits he once was “hesitant and negative toward lamination overall” — even to the point of avoiding it. His comfort level with the process has soared, however, ever since his in-plant at Omaha Public Schools installed a Graphic Whizard PT33LSC laminator. In place since last spring, the device furnishes the durable COVID-19 signage the school system relies on to keep its population safe.

At work in the school system’s department since last April, the PT33LSC combines lamination, slitting, and cutting in an automated sequence that’s designed to support the kinds of digital printing that in-plants like Priesman’s produce. After laminating the printed sheet on one or both sides, or encapsulating and sealing it between two extended pieces of film, the PT33LSC slits and cuts the protected sheet to its exact finished size without the need for additional trimming.

The machine’s one-pass capability, Priesman notes, is what won him over. Before the PT33LSC, Omaha Public Schools Printing & Publication Services used an off-line laminator to finish sheets from a wide-format device that then had to be cut and trimmed in a separate step. This required an amount of labor that Priesman calls “absurd” in comparison to the hands-off efficiency of the Graphic Whizard device. Faced with doing it the old, cumbersome way, he says, “I had always discouraged lamination.”

But Priesman works for a school district, and in school districts, lamination has many friends. He notes, for example, that teachers (including the one he’s married to) “are by nature very frugal.” They want their printed matter to be able to hold up “with little hands working with it.” He says that despite his misgivings about the labor involved, “I was told without exception, ‘Your idea is wrong. Sometimes we have to laminate.’”

The in-plant's equipment dealer, Print Technologies Inc., recommended the PT33LSC, which Priesman acquired with the help of a trade-in allowance for some bindery equipment the shop no longer needed. It arrived just as the first wave of the COVID-19 pandemic was beginning to spread across the country, and the in-plant lost no time in putting the device to an increasingly urgent use. 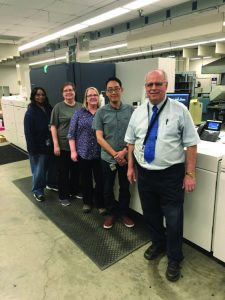 According to Priesman, the shop compiled a menu of about 25 different pieces of safety signage it could print and laminate for the Omaha Public Schools system, which serves 54,000 students in 80 school buildings and other facilities. When principals and teachers saw what was now available to them, he says, “the sky opened up,” and the orders for laminated signs poured in.

By last December, Printing & Publication Services had finished about 55,000 sheets on the PT33LSC, which can laminate formats from 7x7˝ to 13x19.7˝ at up to 10 fpm. Priesman says the pieces are usually 8.5x11˝, laminated beyond the edges on both sides as a barrier to moisture, like restaurant menus (unless the shop has been asked to finish the sheet in some other way).

The school system’s appetite for laminated signage grew so intense that at one point last year, Priesman had to order 36 rolls of 5-mil film and 76 rolls of 3-mil film to make sure it could keep up with the demand. According to the dealer, the stockpile represented 100% of the film in those thicknesses available at that moment in North America. Priesman says that when word of the unusual quantity reached the CEO of Graphic Whizard, he called the dealer wanting to know, “What is your customer doing with all of this?”

Priesman says the shop was simply covering all the bases for its customers — something it always does no matter how out of the ordinary the need may be. Last year, for example, the in-plant geared up to print 2.6 million pages for at-home course packets as part of the school system’s response to the pandemic. The emergency assignment saw Priesman and his team working up to 20 hours a day, seven days a week, until the task was done.

Printing & Publications Services is well equipped to handle whatever the school district sends its way. “We are a 100% sheetfed, high-volume, inkjet shop,” Priesman says. Over the last few years, the in-plant has replaced all of its toner equipment with a pair of inkjet presses from Xerox — a Brenva and a Baltoro. These cut-sheet devices add color and variable data to school system documents in ways that weren’t possible with the digital toner printers.

And now, thanks to the Graphic Whizard PT33LSC, the in-plant can offer its customers protective lamination with the same efficiency and ease. Despite his old reservations about the process, Priesman has no regrets about embracing it all the way.

“The alternative would have been not laminating,” he observes.

The Man Who Brought Color to Omaha Schools