It’s happened more often than Dylan Turner would have liked: after outsourcing a large diecutting project for customers at Northern Arizona University, they would come back to him a month later asking for a few dozen more. The expense of outsourcing this short run often deterred and disappointed them. But it got him thinking:

“How do we say ‘yes’ to those jobs?” wondered Turner, assistant director of University Printing Services. 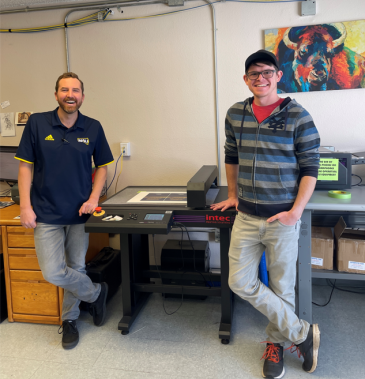 Marketing often approached him with ideas for unique pieces sporting angular cuts or step-folded panels, and he wanted his in-plant to be able to provide these. So, when he learned about a special offer on digital diecutters from Intec, he decided to take the leap and equip his shop for these short-run, eye-catching projects. In the spring of 2021, the Flagstaff, Arizona-based in-plant installed an Intec FB750 digital diecutter.

“It’s a good first step for us,” Turner says. “We’ve been looking for ways to better ourselves.”

What made it even more beneficial was that the deal included an Intec BC480 business card slitter, something that Turner had only been casually looking into, but which has turned out to be a major productivity enhancement.

“It has genuinely been a huge time-saver,” affirms Ryan Wade, printing coordinator for the in-plant, which has six full-time and five part-time employees.

The shop had been comfortable cutting cards on its Polar 76EM guillotine cutter for many years, but would often encounter delays when, for example, the cutter was being used for a large postcard job, forcing the business cards to wait. That delay is now gone.

“You just turn it on and let it run, and you can go work on [other equipment],” Wade says. “It allows you to essentially run two jobs at once.”

The in-plant prints a lot of business cards on uncoated 100-lb. card stock for NAU’s government partners, such as the City of Flagstaff and the Flagstaff Unified School District, using its Konica Minolta AccurioPress C6100 and C3070 printers. With the Intec BC480, the shop is now able to print cards 24-up on a 12x18" sheet, instead of eight-up on 8.5x11" sheets, as it traditionally did. NAU business cards are still imprinted eight-up on shells of 130-lb. coated stock and cut on the guillotine cutter, but once those shells are depleted in a few months, Turner says, the shop will print NAU cards digitally and cut them on the Intec.

“We’re able to produce more efficiently,” he notes. “That allowed us to lower our pricing.”

Another benefit of using the Intec is that it is safer than the guillotine cutter, which requires an extensive safety training process. The in-plant’s student workers can run it with minimal training.

“There’s almost no way that you can hurt yourself with that machine,” remarks Wade.

As for the Intec FB750 digital diecutter, the in-plant is still getting up to speed with it. It was recently used to finish a 150-piece stationery notecard job with a diagonal diecut on the front panel for the NAU president’s office. 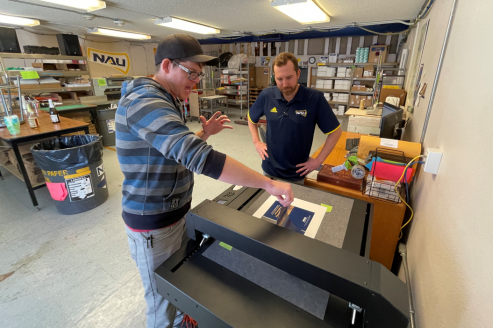 “They loved it,” remarks Turner.

He has ideas for other projects, like diecut magnets, custom-cut labels, and personalized handouts cut into shapes. With the diecutter installed, the shop is now ready to help when customers come up with ideas for specialized products like these, or when they need just a few extras after subcontracting a large diecutting project. Plus, the Intec FB750 can be used to create prototypes to help customers perfect their projects before ordering them.

“It’s kind of an entry-level unit, for sure,” he says. “But it seems pretty sturdy. This is a good way for us to get started.”

The shop’s next acquisition, Turner hopes, will be a CNC cutter to produce campus signage on rigid substrates.

Related story: University of Pittsburgh Embraces the ‘Effects’ of Change