This story was originally published June 1, 2001.

Tim Criswell was born just 15 miles from his print shop. What's more, he's lived all of his 48 years in California's San Fernando and Simi Valleys, just northwest of Los Angeles. 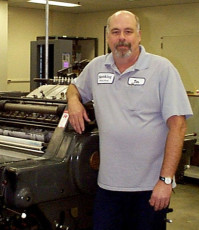 Still, it took some guts for him to enter three samples of his work in the In-Print contest back in 1999. After all, how could his two-man shop stand a chance against the huge in-plants of the world? To his surprise, his entries won two first place prizes and a third place.

"I was thrilled," he recalls.

Last year two of his three entries won prizes, and this year he again won two firsts and a third. This streak of success has done wonders for Criswell's shop, boosting its reputation and bringing in new business.

"We've substantially increased the work in the last couple of years, which has enabled us to really upgrade our equipment," he says. The shop has added a Heidelberg KORD, a networked Xerox DocuColor 40, a T/R Systems Micropress with two Ricoh printers, and a Duplo collator/bookletmaker.

Criswell not only manages his shop, tucked in the basement of Sunkist's headquarters, he runs its equipment, together with his assistant Hector Hernandez. He has worked in print shops since his high school days, when he switched his major from history to industrial arts.

In Criswell's senior year, the foreman of a local forms printer, Control-O-Fax, called the school looking for part time help. Criswell signed on. His first duty was washing down the shop's seven presses. Even this dirty job had a bright side, he says.

"It teaches you where the controls are...without the pressure of having to worry about the quality of a job," he says.

After graduating in 1970, Criswell went to work there full time, learning every aspect of printing, from stripping to shipping. He stayed with the company for 17 years before moving to a "mom and pop" shop called AR Graphics. Though he planned to work there only until something else turned up, this interim job became long term.

Criswell had married when he was 19, so to support his family he also worked part time at other shops. (For seven years he even kept a Multi 1250 in his garage for odd jobs.) One of those shops was Sunkist Growers. The company liked his work, and in 1996 he was asked to replace the shop's retiring supervisor and build the operation back up. It was not an easy task.

"This was, in all honesty, a dying operation," he admits. The shop printed mainly forms and stationery—no marketing work. That soon changed.

In the winter of 1998 a freeze destroyed much of California's orange crop. Faced with a drop in revenue, Sunkist imposed a freeze of its own on budgets. Without much money to spend on printing, departments looked for another solution.

Soon after the freeze, the company newsletter published an article on Criswell's In-Print contest sweep. The departments took notice. Urged by his boss, they began sending the shop their marketing work. Small jobs were followed by larger ones, and the shop's volume grew. By 2000, he says, the in-plant was doing 9.5 million impressions—up from less than 5 million impressions in 1998.

He credits his DocuColor 40 with making the shop more visible because it gave customers a fast, cheap way to print color. His next goal is to add a two-color press so he can bring more color work back in-house. He also hopes, someday, to add more employees to the shop to reduce the time he spends on the presses.

"I've been standing next to these machines for 30 years," he reflects, "and I would certainly like to not have to be tied to a machine."

His job at Sunkist is his first experience in an in-plant, and he loves it.

"I have more freedom, more control," he says. "I'm basically allowed to run it as my own business."

When he attended the Unisource-sponsored in-plant workshops a few years ago and heard the presenters tell managers to treat their in-plant like a business, he says he knew he was on the right track.

Criswell stays abreast of industry news through his membership in the International Publishing Management Association, where he serves as vice president of the Channel Islands chapter. He plans to attend the IPMA 2001 conference this month in Portland, Ore.

Though he has traveled to other parts of the country, Criswell has no thoughts of leaving his valley permanently.

"I can look out my backyard and see the mountains," he says, contentedly. Plus he enjoys being around his two daughters and his granddaughter.

Though he admits printing is just a job to him, not an obsession, he has no thoughts of changing careers.

"I'm probably happier in my professional life right now than I have ever been," he says.