Roy Nance knew his in-plant needed to replace its older Konica Minolta digital printer. The associate director of University of North Texas Printing and Distribution Solutions had a machine in mind, but he had never actually seen it in operation. Then PRINTING United came to town.

The massive trade show debuted in Dallas in October, a short drive from UNT’s in-plant in Denton, and Nance was there on the first day, walking the show floor. He stopped at the Ricoh booth for a demo of the Ricoh Pro 7210X, and he was hooked. 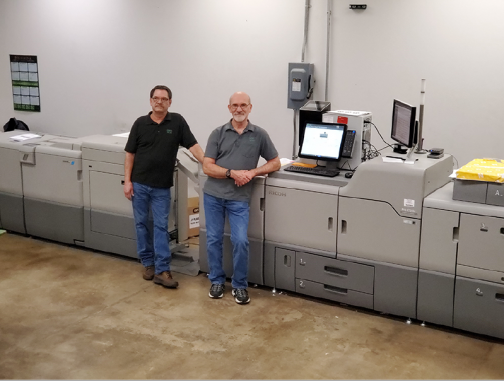 “I got to see that it’s a heavy-duty machine. It looked easy to operate,” he says.

Ricoh representatives opened up the device, pointed out its features, and showed him how to change the fuser and replace toner. They printed samples, which were impressive, he says. “They went through it pretty thoroughly,” Nance recalls. That demo and the chance to put his hands on the device won him over. UNT installed a Ricoh Pro 7210X in February, and it’s been running like a charm ever since. 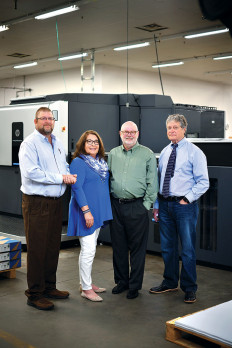 “Right out of the box the color was really good,” he praises. “It was hitting our green pretty much dead on.” And UNT’s Pantone 356 green is a pretty important color to get right.

“The color’s good, the registration is fantastic … and the service is outstanding,” he raves. Nance credits PRINTING United with providing him such an in-depth look at the machine, as well as a great chance to see all of the latest printing technology in one venue.

“I think you’ve got to go to that show if you’re in the market for anything,” he advises other in-plant managers. “I think it’s a necessity.”

One of the best features of the 7210X, Nance says, is the fifth color station, which allows the shop to lay down white or clear toner. “It’s almost like a spot varnish, with the clear,” he says. “We do some clear foil stamping, which we had to send out.” Now that work will stay in-house. Printing on dark paper with white toner will also open up more opportunities, he says. The device’s ability to print oversized paper — coated and uncoated media up to 13x27.5˝ — lets the shop print large trifold brochures.

Nance likes the heavy-duty in-line Plockmatic booklet maker with a three-knife trimmer that attaches to the 7210X.

“We do a ton of booklets,” he explains. Now the shop can print, stitch, and trim booklets all at once, instead of taking them to an offline cutter. The Plockmatic system, he adds, can also be rolled aside and used independently of the printer. In addition to being able to take an in-depth look at the 7210X at PRINTING United, Nance was pleased with how many new devices and systems he saw at the show. He was impressed to see a whole section devoted to dye-sublimation equipment.

“You look at this equipment that you read about but you’ve never seen,” he says. “You get to talk to different people and get different perspectives.”

Nance checked out a variety of wide-format printers and got a great perspective on the different levels of technology available.“You get to look at everything from the bottom of the line … all the way to the top of the line,” he says. He advises fellow managers planning to add wide-format equipment to attend PRINTING United 2020 in Atlanta.

“If you want to get into that, you need to go to a show like this,” he urges. “You need to go and look at everything that’s out there before you make your decision.”

'Ingrained in the Fabric' of the University