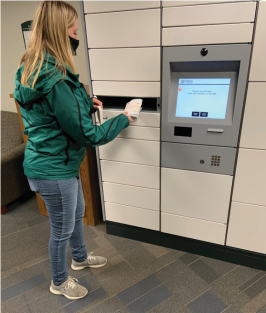 Smart parcel locker systems are not a new technology, but they are changing the way in-plants manage mail and package delivery in very big ways — especially since the start of COVID-19, when touchless systems suddenly became a lot more intriguing. But what exactly makes a locker “smart”?

No matter which manufacturer an in-plant chooses to work with, the basics are the same when it comes to intelligent parcel lockers. They are a system of locker banks that can be installed across a campus, with various sizes to accommodate different packages. Most include a notification system that allows mailroom staff to send messages to recipients alerting them that they have a package and the location of the locker where they can pick it up, as well as a code or pin to open that specific locker.

Where the differences come in are with things such as whether or not that alert system is completely separate from anything else the in-plant is using, or if it can be easily integrated into current software systems. Another difference might be how long recipients have to claim their packages before the mailroom staff needs to retrieve them. The materials can also vary; metal lockers, for example, will be more secure and will hold up better over time versus wood.

At the University of Oklahoma (OU), smart lockers aren’t a new feature. In fact, Andy Wright, supervisor of Central Mail Services, which is part of Printing & Mailing Services, notes that his operation installed the Quadient PackCity Parcel Lockers back in 2018, long before the pandemic made in-plants re-evaluate how mail is handled. He notes that, for OU, it was more about improving the flow and speed of mail delivery.

“We had the same tracking system we use now,” Wright says, “but we were physically delivering everything over the counter. The initial process was the same — we scan it in, and the recipient receives an email that we have it and … the hours we’re open.”

But students would have to stand in a single line to reach the pickup counter. Meanwhile, the increase in online ordering was bringing more delivery people into the dorms, who would roam the floors with packages. To stop this, dorms were closed to outside access, limiting visitors to only the lobbies, which meant students had to come to the mailroom for everything. Lines doubled, even tripled during high-volume periods. Something had to be done.

At Ohio University, however, COVID was the final push that got the university to install the Quadient smart locker system. Blaine Gabriel, director of Printing Services, Mail Services, Moving and Surplus, Student Mail, and the Sign Shop, says his team had been hand-delivering packages and mail to each individual recipient, a time-consuming process. He started looking into smart lockers prior to the pandemic, but once it hit and the need for social distancing became important, suddenly the smart locker system was more than just a time saver; it became a critical upgrade.

“We started really looking and benchmarking, and saw the benefits,” he says. “We had a couple of test sites, and then last fall we installed them in the student center. We used to have 23 student mail locations, and now we’re down to just three locations with 24/7 access. For faculty, we have them in nine buildings, and we’re looking to add three or four more. So far everybody loves it — we haven’t found anyone who doesn’t like them yet.” 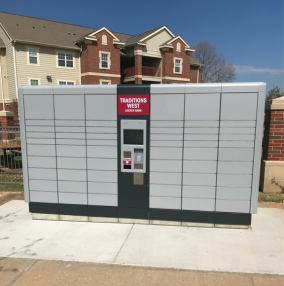 Outdoor lockers at a University of Oklahoma student apartment community.

When looking into smart lockers, both Wright and Gabriel both stress the importance of evaluating all the options. Taking the time to really determine which features are critical, as well as how many banks you’ll need and where they will be installed, is an important step to take before making any decisions.

“Initially, talk to as many people as you can,” advises Wright. “Get a range of input on how many ways you can do the same process. When it comes to delivering a package, there are a hundred ways to do it.” One thing those new to smart lockers should look for in a contract, he says, is the ability to change things around after both the in-plant staff and recipients have had a chance to use them a bit.

“From our learning curve, one thing we did that really ended up helping us was that, at first, we really didn’t know what we needed,” he says. “So we negotiated in the ability to reconfigure in the first year.”

He notes that the system OU’s in-plant ultimately chose had banks that could be moved around. So when his staff noticed some banks were always full, while others had quite a few empty lockers, he used that clause to simply shift lockers from one bank to another without needing to incur additional costs.

Another piece of advice Wright has for those new to smart lockers is to make sure to ask where the tech support team is located.

“That was an issue we ran into [in the beginning],” he says. “If we had any kind of software issue, the tech was based in France, so if it broke for us at 2 p.m., it was the middle of the night for them, and it would be the following day before they started working on the problem. It caused some issues. So, make sure to ask where the tech is located.”

He adds that the in-plant does have access to U.S. technicians for day-to-day issues, but software updates are still handled out of France.

Ohio University’s Blaine Gabriel says smart lockers are now saving his staff as much as three hours a day delivering mail and packages.

Another thing to keep in mind is the location of the new smart lockers, and what will need to be done to get them into place. For Wright, the entire process took about three months from start to finish, although he notes that a big chunk of that time was dedicated to getting the sites ready for the new lockers. After getting site requirements from the vendor, he worked with OU’s campus facilities team to get cement slabs poured and electrical and network connections set up. Once that was all done, he says, the actual installation only took about a week.

That experience was echoed by Gabriel, who notes it took around two months to get Ohio University’s lockers up and running.

“There were a couple of places we had to reach out to facilities to attach plywood to the walls so the lockers could be attached,” he says. “But mostly we were pretty prepared.”

Both managers also said a big part of the preparation work entails ensuring all locations have the correct networking capabilities, as smart lockers need to be able to interface with both the central mailroom software and the individual users’ smart phones as they claim their packages. For those looking to upgrade to a smart locker system, having the IT team — in addition to the facilities or maintenance teams — involved from the beginning is the best way forward.

In fact, Wright notes that while he served as the go-between early in the process to convey the manufacturer’s requirements to OU’s IT and facilities staff, eventually, he says, he just “ended up getting phone numbers for everyone and let them deal with each other. It was easier for the locker guy to talk to the IT guy and ask questions, rather than me playing middleman and asking the wrong question.”

Fortunately, once the smart locker systems were installed at both universities, converting users was very easy.

“Kids are used to technology anyway,” Wright notes. One way he got the word out about the new system and how to use it was with a video that walks users through the process; a scannable barcode on the lockers will bring up the video if students need a refresher. He also printed cards with that barcode to hand out to incoming students during orientation events.

For Gabriel, getting the word out began with a mass email to everyone in the mail system, followed by in-person training for the faculty as each new bank was installed and brought online.

“It wasn’t difficult,” he says. “We just had to take the time to show them. And once you do it, it’s simple.”

The Benefits of a Smart Locker

Other than the time savings — Gabriel notes that the system is now saving his staff as much as three hours a day delivering mail and packages — another great benefit to upgrading to this type of system is the ability of recipients to get their packages at any time. Both campuses put their locker systems in locations where they can be accessed 24/7, rather than restricting those who need to pick something up to the mailroom’s hours of operation. It adds a lot of flexibility that users appreciate.

“They don’t have to come to us to get it,” Wright says. “We can fill all the lockers in a couple hours … and we can process a lot more daily than we could straight over the counter.”

And while Wright notes that his staffing levels didn’t change at all after the smart lockers were put in, for Gabriel it did make a significant difference.

“Before COVID, we had 54 students working, and with smart lockers we’re employing around 30,” he says.

At the end of the day, Wright reiterates that his single best piece of advice for any in-plant considering smart lockers is to “talk to people that have them directly. You will get answers. A locker is a locker; they are all kind of the same. We looked at six or seven different companies, and they were all pretty close. So look for the little differences [such as] how the software works. Does it use [proprietary] software? Can it integrate with your current software?

“If people are honest with you, they will say, ‘here’s what we picked, and here are the problems.’ I think we did pretty well, but there was an initial learning curve, and integration was a problem,” he concludes. “But they’ve worked great for us.”

Pantone Introduces Its 2023 Color of the Year
END_OF_DOCUMENT_TOKEN_TO_BE_REPLACED