For the most part, when one upgrades a product or service, it comes with a substantial raise in price. Think of upgrading your cable package, cell phone service or even your home. An upgrade usually means more of something: more channels, more data, more space — and more cost.

That was not the case, however, when SeaPrint Graphic Solutions at the University of North Carolina Wilmington upgraded to a new Ricoh Pro C7100 color production printer.

Early in 2018, SeaPrint Graphic Solutions decided to elevate its print production capabilities by trading in its Ricoh Pro C901 for a Ricoh Pro C7100.

“Our lease was up on the C901,” explains Steven Barrett, production manager.

As with the C901, the in-plant got 30,000 free color clicks per month on the C7100, but the cost per click on color and black is now even lower. What’s more, Barrett negotiated a Xanté Impressia as part of the deal; the lease on both machines was cheaper than the lease on the C901.

SeaPrint plans to print anything and everything that can fit on a 12x18˝ sheet of paper on the new Ricoh, including brochures, booklets, small posters, handouts and postcards.

“I’m not really sure it’s going to produce anything more than what we have run in the past, but a much better looking printed piece in the end,” Barrett explains. 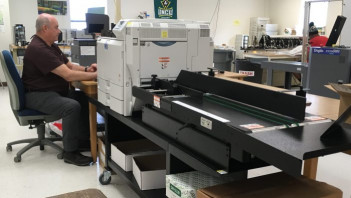 The Xanté Impressia has come in handy already for printing envelopes, forms and panel cards

One- and two-color jobs will be printed on the shop’s offset equipment, but all other products will go on the C7100. He also says the new equipment will help provide customers a faster turnaround time.

The Xanté Impressia has come in handy already, Barrett says, for printing envelopes, forms and panel cards — items that used to printed offset.

Another reason for needing offset, he says, is because one of the school colors is 874 gold metallic, which can’t be produced on a digital press. 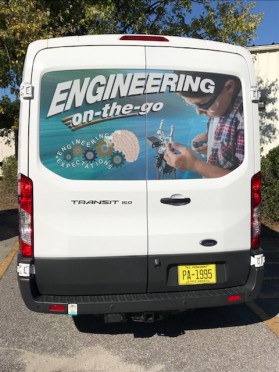 Vehicle wrap done by the in-plant.

However, the main reason for moving offset jobs to the Xanté Impressia, Barrett says, is because Presstek, the maker of the in-plant’s Vector 52 platemaker, stopped making Freedom Pro printing plates for that system. There no other source for those plates.

“So, as of now, we have a limited amount of plates left before we need to come up with a solution for new plates, processor and RIP system,” Barrett says.

The Impressia has also helped with faster turnaround times on smaller time-consuming jobs that would otherwise be run on offset.

SeaPrint Graphic Solutions has been busy with vehicle wraps and various signage projects as well. The in-plant has been printing vinyl for all new golf carts and GEM cars as they come on campus. The school’s chancellor wants all campus vehicles to be uniformed to promote the campus. So, as new vehicles are bought, new graphics are installed by the in-plant.

The PRINTING United Digital Experience will span three action-packed weeks beginning October 26 and running through November 12. Representing market segments throughout the industry, the Digital Experience will offer over 100 world-class educational sessions and more than 40 product launches for everyone across all job functions to access, at no cost.

From the Editor: Back to School, With a Twist
END_OF_DOCUMENT_TOKEN_TO_BE_REPLACED
Upcoming Webinars
Reimagining Your Business in Unprecedented Times

Hear from business owners and managers that have stepped up to the plate to do their part in helping companies deal with the pandemic.

This revealing webinar lays out the power of direct mail when printed on a continuous web inkjet press.

Learn More
The Economics of Investing in an Inkjet Press