Frank Davis spent 45 years working for the University of Washington, most recently as director of Creative Communications. He steered its advance from a formidable offset operation to a lean digital enterprise.

Before Davis retired in June he had one final goal: upgrade the in-plant’s six-year-old Xerox iGen4 to a new iGen 5 120. 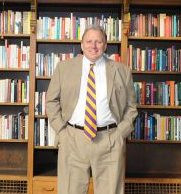 “He really wanted to get the iGen 5 in before he left,” says Interim Director Katy Folk-Way. “That was one of his personal goals. And it came in a week before he retired, so that was great. It was up and running before he was out the door.”

The iGen 5 came with an in-line C.P. Bourg stitcher, which can score, crease and three-knife trim, and can also be taken offline. It uses the EFI Fiery Command WorkStation front end. But the improvement in output quality from the new digital press is what Folk-Way is most excited about.

“The very fine print is so much crisper,” she says. “Everything is just so much sharper now.”

This lets the in-plant bring some outsourced offset work back in-house.

“A lot of those shorter runs we’ve been able to pull back in, because the quality’s so great,” she affirms. “The quality of the flood colors closes the gap between iGen and offset printing.” 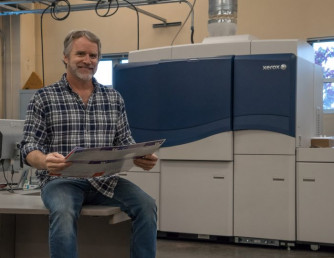 Folk-Way also loves the 5th Print Station, which the in-plant uses to lay down white ink.

“We think that’s going to be great for our customers,” she says. “We’re really excited about it.”

The white can be used to accent the university’s signature purple color, used in all of its branding.

“Pantone 2685 is hard to hit, and the iGen does it consistently,” she says.

“It’s a workhorse,” she praises. 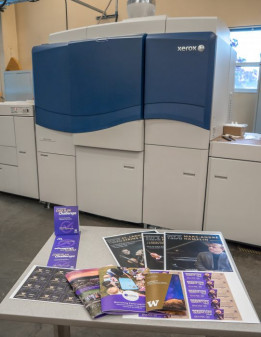 Though the iGen 5 120 is rated for 650,000 pages per month, Folk-Way is pleased that if volumes continue going up, the in-plant can upgrade the press to an iGen 5 150, which runs at 150 ppm and outputs up to 1 million pages per month.

“You can change the speed without changing the machine,” she says.

Davis was able to negotiate a great deal for the iGen 5, so it ended up costing the university significantly less than the lease costs on the iGen4.

Moving to the iGen 5 was an easy change for the shop’s operators, Folk-Way says, and they love the new press.

“They had a very easy transition,” she says. “It’s been great for morale. It’s just really fun to have this new, beautiful piece of equipment. It was really great to get it in before Frank retired. Frank really worked hard to get this approved.”

University of Washington: Keen on Lean