Bobbi Francis has had a lot of experience with Xerox.

“I’ve been here for 41 years, and we’ve been an all-Xerox shop the entire time,” says Francis, Print & Document Processing Supervisor at BlueCross BlueShield Kansas, in Topeka. “So I was very hesitant to let go.”

She liked the equipment, but when Xerox switched to a third-party maintenance provider a few years ago, the service level dropped noticeably. Response times increased, communications faltered, and Francis felt like her in-plant had become a low priority. She got tired of making excuses to customers when the printers went down and jobs were delayed.

So, when the lease on her in-plant’s Xerox Color 1000 and Docu­Tech 155 HighLight Color printers approached, she sent RFPs to Ricoh, Konica Minolta, and Xerox for replacement devices. The most impressive response came from Ricoh, whose local sales group paid attention to the shop’s concerns, backed up their promises, and proposed a top-notch maintenance plan, Francis says. 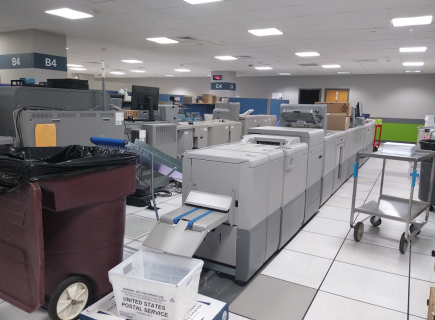 “We feel like a priority now,” she says. “Things are running so much smoother. I have happier employees because they don’t have to struggle with dealing with the technicians.”

Instead of always thinking about backup plans if the equipment went down, employees can feel confident about the delivery dates they give customers, she says.

With EFI Fiery Command WorkStation and Rochester Software Associates’ ReadyPrint software on the front end, the new devices are being used to print marketing materials, such as brochures and newsletters, as well as contracts, letters, notebooks and other items. The shop is also looking into printing magnets. And because of the higher-quality 2,400x4,800-dpi color being produced by the Ricoh Pro C9200, the in-plant has been able to bring some outsourced work back in-house.

“We brought in four jobs that were outsourced before,” Francis affirms. This was due to the improved color consistency from job to job on the Ricoh Pro C9200 compared to output on the previous devices, she says.

“The marketing department and everybody that’s seen the products that we’re printing out now, they’re really happy with them,” she says. “It made our procurement department pretty happy, as far as knowing that we’re going to try to keep some [additional] jobs in-house,” which will, of course, bring cost savings to the company.

The Ricoh is also able to print on certain special substrates, like waterproof stock, that were more challenging on the Color 1000. 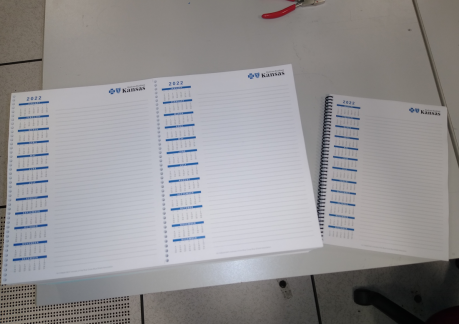 In-line coil punches on both new digital printers let the in-plant print and punch two-up sheets on 12x18" stock, which come out ready for cutting down to 8½x11".

One of the most time-saving features are the in-line coil punches on both new printers. The in-plant had custom dies created to match its offline Rhin-O-Tuff HD7000 and HD7700 punches. The shop can print two-up sheets on 12x18˝ stock on the new Ricoh presses, and they come out punched and ready for cutting down to 8½x11˝ on the Challenge Titan 200s.

“With this in-line punch, it has really saved us tons of time,” Francis remarks. “We don’t even have to put any of that through our offline coil punch. It’s a lot quicker process.”

The in-plant also recently added a Duplo DC-618 slitter/cutter/creaser and is using it to cut business cards and add perforation to printed pieces. The shop also handles the addressing of marketing mail using a pair of Quadient AS-850S address printers, and it runs an Oki HD-CX 1600 color envelope printer. 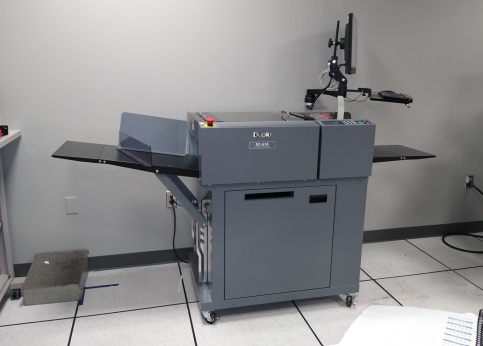 Another new addition is this Duplo DC-618 slitter/cutter/creaser, used to cut business cards and add perforation to printed pieces.

Though the in-plant did not suffer any delays getting its Ricoh equipment due to supply chain issues, Francis says the transactional printing department received two of its three new digital presses a couple of months later than the first. And one of the two Plockmatic F136-002 trim waste conveyors she ordered arrived two months late. 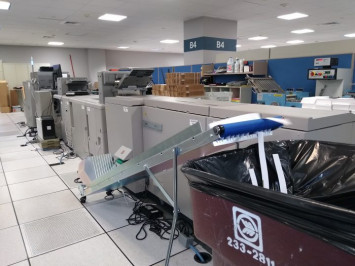 The trim waste conveyor on the back of the Ricoh Pro C9200 color press.

COVID also took a toll on the in-plant’s print volumes over the past year and a half, she says, but work is starting to return to more “normal” levels. Once BlueCross BlueShield Kansas fully opens its offices again later this year, Francis plans to hold an open house to demonstrate her shop’s new capabilities, showcase its portfolio of printed materials, and highlight its new name (Digital Print Shop).