While more than half of all in-plants handle both print and mail, oftentimes their roots are in the former. In the case of East Tennessee State University (ETSU) Postal and Passport Services, the reverse is true.

“I was a post office who decided to get a little bit into printing,” explains Director Don McCarty.

Having joined the Johnson City, Tennessee-based university in 2013, McCarty, with his 30-plus years of experience designing post offices, led the department’s overhaul, a move that would ultimately earn it the In-plant Printing and Mailing Association’s 2017 Mail Center of the Year award.

ETSU Postal and Passport Services, which comprises a total of 6,800 sq. ft., has six permanent employees and three temporary workers. Pre-COVID, however, there were six to eight temp workers. McCarty plans to hire more next semester as business picks up.

Todd Leach and Teresa Yercheck do the rough sort of the letter and flat mail.

Before assuming his role with ETSU, “we were probably 20 years behind the time,” admits McCarty. “In this industry, on the mail side, people keep doing the same thing over and over. The print side, they’ll say ‘Yeah, we need new printers,’ but on the mailing side, it’s very static.”

Equipment upgrades weren’t the only changes he brought to ETSU’s mail operation though. From 2018 to 2020, he completely redesigned the department and was heavily involved with its massive renovation.

“My whole operation, I redesigned it so that every piece of mail is touched once and then processed and doesn’t have to be touched again,” McCarty shares. This includes following the recommended industry standard ‘U’ shape setup for the import and export presort areas and the fine sort station, in which a number system is utilized so that no two people bump into each other.

“The presort function is extremely important, and a lot of schools don’t do it,” he adds.

Proper equipment and setup across the board — down to sort cases, working tables, and display cases for products in the front window — is very important, McCarty emphasizes.

“If you just use whatever comes off the truck, what you had, or what you found, it causes inefficiency,” he contends.

He is also quick to note how his biggest asset has been the support of his leadership, up to the president. They listen to his ideas and are willing to spend money to improve the operation.

“We were originally an office with no metrics or tools to gather [them]; we had no types of automation except for a couple of Pitney Bowes DM 1000s for metering outgoing mail,” says McCarty. “I’m a firm believer that you have to measure everything before you can change because you don’t know if it works better if you didn’t measure it in the first place.”

According to McCarty, many of the processes are manually updated into spreadsheets to track costs, expenses, and volumes to better anticipate peak mail volumes by day, week, and month. The department measures and records everything, including incoming mail by category and volume; outgoing mail by class and costs; parcels by size and volume; quality of address hygiene; and rate of mail pickup. Monitoring package sizes and volumes helps determine the various door sizes needed for smart lockers. 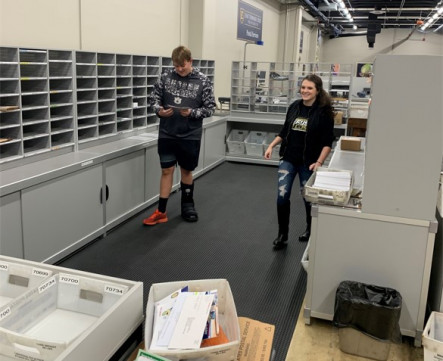 “We didn’t have anything on bulk mailings; we had just a totally non-automated bulk system — no address management software, no machines — basically just putting them in trays, getting a discount that was almost nothing,” he says. “Once we started getting all the right equipment, it’s taken off, and it’s a lot bigger.”

The operation’s Brynka Package Tracking System, he says, is its primary system to record all incoming department packages while providing the capability to record very specific data for outbound prepaid packages for customers in a quick, easy manner.

IPI talks with Don McCarty about the benefits of smart lockers.

“It doesn’t just say how many packages you’ve got, it lets you know how many you’ve got by size, by carrier, [which is] important information because they come through different sources throughout the day,” he adds, noting this now even includes Amazon and Walmart packages. The system is also helpful in scanning and tracking the prepaid packages of books students rent that are returned at the end of the semester, which can total up to 100 a day.

By using this package-tracking system and eventually the TZ Smart Locker System, the department was able to measure volumes, processing times, pickup and delivery rates, and monitor errors.

“We originally just recorded times spent on the separate processes. Once we added automation, we were able to see how much time was being saved,” adds McCarty. 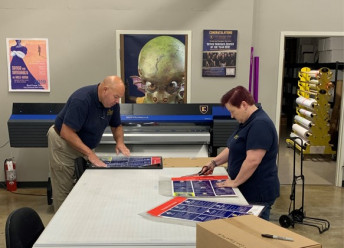 In the wide-format area, Todd Leach and Paula Sluder do the final trimming for the printed and laminated pieces.

“We use discount postage … and charge the customers the full price, which we’re required to do, [making] us money every month and more than [paying] for the system,” he says.

Tracking and analyzing metrics, McCarty adds, “helps when you’re trying to tell the bosses how many employees you need.”

For example, the handling of letter mail, parcels, magazines, student and department mail, and delivery to departments, went from taking a crew of eight people three-and-a-half hours in the morning, to six people completing it in an hour. This gives staff more time to devote to other areas of the operation, such as the print center, passport and photo services, and the retail window.

“There’s no money to be made in postal; you’ve got to get into the business of the printing side, or the passport side because they make really good money,” notes McCarty. “So, if you can do it with the same people you always had, your bosses are extremely happy. That’s where understanding the process, cutting the fat out, and [not] wasting time really makes a big improvement.”

Metrics also help the operation anticipate what is coming while noting historical differences. During COVID-19, McCarty says, all incoming and outgoing student and department mail was significantly down, along with retail sales, bulk mailings, passports, and photos. As a result, the department was able to adjust its budget forecast mid-year, though outbound department parcel mailings were up and wide-format printing was significantly up, he notes.

“Letter mail is nowhere near what we used to have; I used to get 4,000-5,000 letters a day. A really busy day for us now, I’d say, is less than 500, and that’s not just students, that’s departments,” says McCarty, noting the only times he sees a boost is during holidays. “That part of the business, I don’t know if it’ll ever recover, but the bulk mailing side is still pretty strong for us.”

Package numbers, despite a massive drop during COVID, are up, slowly coming back, he adds.

One of the operation’s most successful initiatives, according to McCarty is its software system, which was built in-house. This continually upgraded software distributes the new addresses to students while allowing them to submit forwards, holds, close requests, updated information, additional authorized users, and more. Staff can run reports and search by dozens of queries, and communicate by individuals, groups, or classes, or to everyone at one time. It also provides data updates via a CSV file to maintain the department’s smart lockers and smart boxes.

While many schools have adopted smart lockers, ETSU’s integration with smart mailboxes is revolutionary, McCarty notes.

“The smart mailboxes was a concept I fought hard for, [for] many years, and it is great to see them come to reality,” he adds, noting the increased efficiency, security, and contact-free, 24/7 access they provide.

“[Lorton Data is] great to work with — a great price, and great customer support,” McCarty lauds. “We not only use them for all of our mailings, but a lot of times we’ll have departments that have a couple hundred thousand records they want checked; we’ll check their whole file for them and give it back to them even though they’re not doing a mailing ... So, for the outgoing side, it’s going to give you all those corrections.”

What has also contributed to ETSU Postal and Passport Services’ success is its simplified web ordering system. Every item has a link, where if customers want something printed, they can see the numbers on the page and indicate how many they want. The staff will then call to ask for more details (e.g., type of finishing) and educate the customers to help determine what they need. For bulk mailings, there is a form on the site for departments to submit jobs along with their mailing lists to start the process.

When it comes to equipment investments, the operation has a Neopost DS-85 folder/inserter, and Xanté Impressia and En/Press envelope printers for printing envelopes, stationery, and post cards. McCarty says he’s looking to buy a digital press and cutter for five-piece mailings, noting another office on campus handles the insert printing for its mailings. His department offers wide-format printing with a 64˝ Roland VG 640 wide-format printer/cutter, printing a variety of items: wall and floor decals, door wraps, retractable banners, yard signs, vehicle wraps, window perf, and much more. Still, McCarty is not interested in growing his print operation. He does, however, emphasize the value of merging postal and print operations.

While ETSU Postal and Passport Services has made many improvements in the past several years, McCarty does understand the challenges of change.

“On the mail side, it’s extremely hard because you have the same people forever doing the same job,” he says. When he arrived “everybody had to get new jobs and learn new equipment and new procedures, and deal with a high rate of turnover among the temp staff and our customers.”

He was very thankful to have a team that excelled at it all.