The Fate of Houston's In-plants After the Flooding 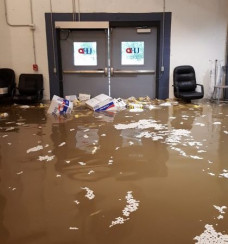 Flood waters filled the shipping, receiving and mail room areas at the University of Houston-Downtown Mail and Delivery Services.

As the city of Houston slowly drains after the record rainfall dumped on it by Tropical Storm Harvey, in-plant employees around the region returned to their operations this week to find out if they still had shops to work in. For some, the drive to the office to learn their in-plant's fate was teeming with trepidation.

"I was very concerned on Friday," reveals Chuck Werninger, senior manager of Administrative Services at Houston Independent School District, who had heard last week that the printing plant grounds were flooded. With visions of his in-plant's new Océ VarioPrint i300 cut-sheet production inkjet press underwater, he drove there to see for himself on Saturday.

"Our shop is dry, and it doesn’t appear to have any damage whatsoever," a relieved Werninger told IPG. "We have one machine that looks like it’s having a software problem but the vendor thinks they can fix that, so it appears we’ve dodged a bullet on this one." 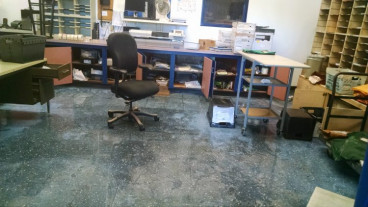 The water damage after the waters receded at the University of Houston-Downtown Mail and Delivery Services.

Not everyone dodged that bullet. University of Houston-Downtown Mail and Delivery Services was flooded. More than a foot of water filled the shipping, receiving and mail room areas.

"Lots of damage," laments manager Debora Evans. "I am trying to stay calm. My department has relocated to another building on campus."

Of the other southeast Texas in-plants that IPG contacted, all seem to have avoided flooding in their shops. Yet all told the same story of employees who lost their homes and cars in the flood. Many of those same employees, however, reported for work yesterday.

"We are all back at work today," confirms Sally J. Rowland-Ketley, director of the University of Houston Printing & Postal Services. This includes four employees who lost their homes. One had to escape with his wife in a kayak as the waters rose.

Though water invaded some university buildings, the in-plant was dry, says Rowland-Ketley, due to its elevated location.

"Overall we were very lucky," she observes.

The biggest impact seems to be the fact that all mail deliveries over the past week had been held. They arrived yesterday.

"Our office was spared any damage," she says. "No water or anything. I don’t even think we lost power. We took quite a few precautions before we left on Friday and that helped greatly." 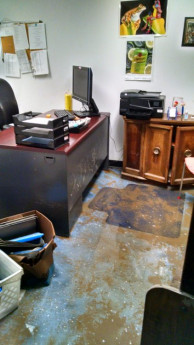 The water damage after the waters receded at the University of Houston-Downtown Mail and Delivery Services.

Her in-plant was expected to reopen today.

"Now it is business as usual and playing major catch up," Horbelt says. "When we left on Friday, we were booked out about two weeks in all departments due to the end of the fiscal year crunch. We have now lost a week of production but will manage. I am thinking our customers will be understanding, and I can always go outside to get work done as well."

In the nearby Gulf of Mexico city of Galveston, Graphic Design and Printing Services at The University of Texas Medical Branch was also spared.

"We are up and running as of today," Manager Otis Johnson told IPG yesterday. "Out of seven FTEs only two employees had significant water damage, so I would our staff was truly blessed. Fortunately for Galveston and the university damage was minor. Our thoughts and prayers go out to our friends in Houston."

Three New Challenges of the New Normal
END_OF_DOCUMENT_TOKEN_TO_BE_REPLACED
Upcoming Webinars
Print Outlook: What to Expect in the Year Ahead