With images of the historic flooding in Houston shocking the world, in-plant managers in America's fourth most populous city are living in a nightmare.

"The devastation is unbelievable," says Donna Horbelt, director of Printing & Media Services at the University of Texas Health Science Center at Houston. "Take what they are showing on TV and multiply by 100." 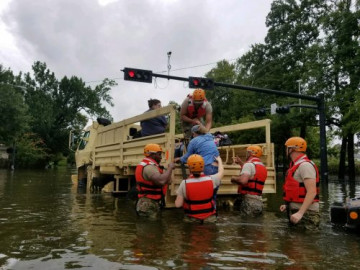 "I just picked up a very dear friend and her husband at the George R. Brown convention center," Horbelt posted on Facebook yesterday. "Their house is filled with water and they have probably lost everything. Over 6,000 people are there and they have lost everything as well."

She says it took her two hours of wandering through the sea of displaced people to find her friends, who were carrying their belongings in trash bags.

"This is just one shelter out of probably 100 across our area," Horbelt says. "It was the most humbling experience I have ever had. If you can give, please do — money, time or resources. You cannot imagine how much need there is here."

Though UTHealth's website says it is still on "controlled access status," Horbelt hopes to get to her in-plant tomorrow to see how it fared.

"I have employees whose homes have flooded and several have lost their automobiles," she says.

"At least two of my employees were evacuated and have lost everything," he reports.

His own house, where IPG reached him by cell phone, came perilously close to flooding.

"We had about two feet on the street in our neighborhood, but it didn't get into my house," he says. "Nearly everything we own is upstairs." Sandbags are piled around the entrances to his home, where he and his family are essentially trapped, with all roads flooded.

"It's almost incomprehensible the level of the damage here," he says.

As for his in-plant, he has no idea of its fate. It's elevated about six feet on a concrete slab, but that part of the city has experienced massive flooding.

"A lot of our schools we know for sure have standing water in them," he laments.

The school district is closed the rest of this week, and won't reopen until after Labor Day.

At University of Houston Printing & Postal Services, Director Sally J. Rowland-Ketley reports that "our shop is fine at this time. It is one of the higher buildings on campus."

She notes that her subdivision is draining well. Some of her staff, however, had to be evacuated.

"Our graphics design supervisor and his wife kayaked out of their home," she reports. "It is a total loss."

All three managers praised the efforts of rescue crews.

"There are a lot of heroic people that have done amazing things," says Rowland-Ketley. "Keep sending your prayers and we will give other updates as we find anything out."

The experience has been traumatic for all of them, however.

"I will say that I had nightmares last night," remarks Horbelt. "It is something I won't forget for a long long time."

Donations for flood victims can be sent to the Salvation Army or American Red Cross.