Manager Returns to Alma Mater to Automate its In-plant 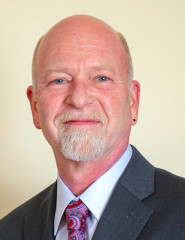 Mike Griswold doesn’t mind getting his hands dirty. Despite implementing a sophisticated workflow automation process at Tacoma Public Schools’ in-plant designed to reduce manual touches, he still likes to be at the controls of his shop’s digital printers and bindery equipment on occasion, and steps in whenever he’s needed.

“I like the kind of work where I can work with my hands,” he admits. It gives him a break from the planning, number crunching, and other duties involved in running his five-employee Printing and Graphics operation, located 35 miles south of Seattle.

This stems from a long career spent running presses at various western Washington printing companies. Even a crushing hand injury at his first job hasn’t dimmed his passion for printing.

Born in Tacoma, Wash., Griswold graduated high school in 1975 from the very district that now employs him.

“Photography was my big love back then,” he says. He followed that passion to Western Washington University (WWU), where he enrolled in its visual communications education program. It covered not only photography, but graphic design, broadcasting, silk screening, offset printing and more. It was there he learned to run a Heidelberg GTO.

“We got our hands dirty,” he says. “It was a little bit of everything.”

While at WWU Griswold was also an avid participant in the school’s theater program.

“I felt like I had a minor in theater and a major in graphics,” he laughs.

After graduating in 1979, Griswold felt his best employment opportunities would be in Seattle. He took a job there for a company called Ace Novelty, printing pull tabs. It was there, while cleaning a press blanket one day, that his hand got caught in the press, flattening one of his fingers, an injury he still bears.

By 1980, the same year he got married, Griswold had moved on to Graphic Color, a premier Seattle commercial printer.

“I ended up becoming a pressman and a journeyman,” he says.

After working there for eight years, Griswold yearned to return to Tacoma, so in 1988 he took a job there at Johnson-Cox, another commercial printer.

“It was a small place, family run,” he says. “I never did really fit in with the family.”

After seven years, he and the family parted ways, and Griswold found himself unemployed.

He also endured another parting during that period when his marriage ended, and he found himself a single father raising three children.

Griswold used his temporary work hiatus to reinvent himself. He bought a computer, installed Adobe PageMaker and PhotoShop, and studied graphic design. He started a freelance design business, and worked briefly for a trade school. When he heard about an opening at Tacoma Public Schools for a designer in 2003, he was ready.

When he started, the in-plant had six employees and ran A.B.Dick and Multi 1250 presses. Griswold worked as a designer for five years, and because of his comfort with data and Microsoft Excel, he soon became a resource for the school district when it needed data on the department’s volumes and revenue.

When his boss departed in 2008, Griswold was promoted to Printing and Graphics Lead. By then the staff was down to five. He admits some initial challenges navigating relationships with coworkers who had worked in the shop for decades and were set in their ways, but things improved as his management skills grew.

In 2012, his boss brought in a consultant who recommended the shop switch to Océ digital printers and implement Rochester Software Associates’ WebCRD Web-to-print software to make it easier for customers to order printing. This was the first step in what became an infusion of automation at the in-plant — but it was not an easy initiation.

“It ended up being me coming in every weekend for about six months and getting it set up,” Griswold recalls.

Once up and running, he says, the results were incredible.

“The ease of ordering is huge; probably the best part of it all,” he praises. “It also helps us to solidify our connection to the school and show our value.” The cost savings to the district that were ushered in by WebCRD didn’t hurt either. Moving from a carbonless forms-based workflow to WebCRD saved $44,000 per year in labor, Griswold estimates, plus another $50,000 in annual savings from reducing job touches.

In subsequent years, the in-plant has gone on to add additional RSA automation tools like QDirect output management software to automate and reduce touches, QDirect.SCAN for hardcopy job submission, ReadyPrint Pro to automate frequent prepress tasks, and other solutions. Griswold says this automation has allowed the shop to take on additional work while significantly reducing costs.

In 2017, the in-plant faced a challenge when the district wanted to repurpose its space. Griswold was able to keep the shop in the administration building, but it lost 500 sq. ft. of space. The in-plant got rid of its offset presses and went all digital, and moved its paper supply closer to where it was needed.

“It made us a little bit leaner,” he says.

Being able to handle the 30,000-
student district’s needs with his staff of four is a source of pride for Griswold.

The shop proved this last spring after COVID-19 closed the district’s schools, and his shop went into overdrive to print curriculum materials. Over 11 weeks it printed 12.9 million impressions worth of curriculum packets, a feat the required a lot of overtime for Griswold and his employees.

COVID-19 has forced Griswold to split his staff into two four-hour shifts to keep them apart, but he spends the full day in the shop. Though he has plans to upgrade the in-plant’s scoring and laminating equipment, he acknowledges that the district’s budget situation will delay those dreams for a while.

Having recently joined the In-plant Printing and Mailing Association, Griswold intends to earn his Certified Graphic Communications Manager certification. He has been honored twice by Tacoma Public Schools as employee of the month, and his in-plant received RSA’s Best Launch Marketing Award in 2014 for its launch of WebCRD.

Workflow Efficiency in the In-plant

Three New Challenges of the New Normal
Reopening Of America: What Will This Look Like For Businesses Across The US
END_OF_DOCUMENT_TOKEN_TO_BE_REPLACED
Upcoming Webinars
Ignite Profits and Customer Satisfaction