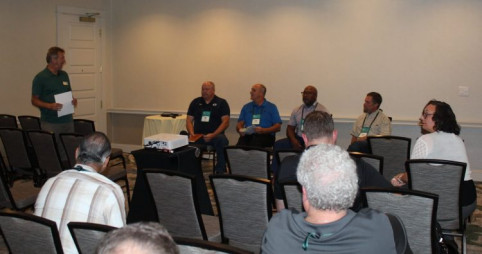 During the Inkjet Summit, all of the in-plant attendees got together to watch a panel discussion between four inkjet users. IPI Editor Bob Neubauer asked them about their experiences with inkjet. Participating were:

Each gave advice to those in the initial stages of researching inkjet.

“Make sure your IT is on board and that they fully bless it,” urged Coley. “That was a big lesson learned.”

Partnering with Solimar Systems on workflow helped things go more smoothly for his in-plant, he said.

He and the others recommended printing the shop’s own files on each inkjet press being considered.

“I would definitely recommend testing as many [presses] as you can,” Coley said.

But also visit users of those presses to get more candid observations.

“We like to talk to the guy that’s running the machine,” noted Estep. This let him and his team understand whether the presses were running as expected and what problems had been encountered.

Bartik noted that Konica took his team to visit other KM-1 users, which proved very helpful.

“You got a realistic viewpoint of what that press was capable of and what it’s not,” he said. By talking to operators, his team learned about the startup/shutdown procedures, and details like the need to wipe inkjet heads and replace filters.

To make the best decision, Estep recommended getting multiple viewpoints.

“It’s important to pull together a cross-functional team,” he said, including people from different parts of your operation. Just don’t spend so much time on analysis that you don’t act, he warned.

“Make sure you do your site survey really well,” added Bean, so you are prepared to meet the electrical requirements, your floor can handle the weight, and components can fit through doors. BYU had to knock down walls to get its inkjet press installed, he said.

His biggest surprise, he admitted, was how hard it was to keep up with the finishing; the inkjet press was so productive it could bury the shop in work.

“I don’t know that we were really prepared for how much work comes off of [the press] and how fast,” he said. “Where are you going to put it when it’s done?”

Though Coley’s shop had no roll-handling experience prior to getting the Rialto, he said his operators quickly became proficient.

“Changing the rolls, I thought that was going to be a nightmare, but it really wasn’t,” he stressed. “It’s very simple.”

Asked their opinion on the minimum number of monthly impressions needed to keep an inkjet press busy, Coley revealed his shop produces about 300,000 images/month on its Rialto. Bartik says his KM-1 prints around 35,000 images/month, and the Brenva does about 1 million.

The in-plants had a mix of in-line finishing equipment on their inkjet presses and offline finishing. Coley and Estep said inkjet allowed them to reduce staffing requirements. All said inkjet quality was extremely good — perhaps not offset quality, but still excellent, especially considering the tremendous productivity boost inkjet brought them.

Three New Challenges of the New Normal
Reopening Of America: What Will This Look Like For Businesses Across The US
END_OF_DOCUMENT_TOKEN_TO_BE_REPLACED
Upcoming Webinars
Ignite Profits and Customer Satisfaction