If you ask Willis Jones where his in-plant got the idea to replace its toner devices with an inkjet press, his answer comes quickly.

“The Inkjet Summit,” he reveals. “Attending that summit and getting all the feedback, and the testimonials, and the numbers — it only made sense.”

Jones made two trips to the Inkjet Summit, an invitation-only event dedicated to production inkjet printing technology, software, and solutions. Each time, he brought home a wealth of data, industry contacts, and reasons to switch from toner to inkjet. That concept became reality in May when OG&E Energy went live with a roll-fed BlueCrest AcceleJet inkjet press in its nine-employee Oklahoma City operation.

“I can’t believe that we waited this long to do this,” says Jones, supervisor of Managed Printing & Mailing Services. 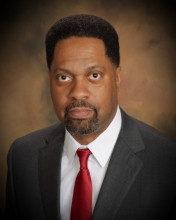 The choice of BlueCrest, formerly a division of Pitney Bowes, sprang from the in-plant’s earlier purchase of two BlueCrest inserters. While Jones and his team were inspecting the inserters in BlueCrest’s Danbury, Conn., facility, they were introduced to the AcceleJet inkjet press. Jones later returned for a more formal demonstration and was impressed.

“It was an easy machine to operate,” he says. “It was exactly what we were looking for.”

What sealed the deal was a maintenance package for the inserters and the new press that included a dedicated, on-site BlueCrest technician.

The in-plant prints between 65,000-75,000 utility billing statements and notices per day for OG&E customers in Oklahoma and western Arkansas. It previously printed variable data onto offset shells purchased from an outside printer, using four monochrome toner devices: two Ricoh Pro 1357s, a Xerox 4127 and a Xerox D125.

“All four of those boxes were operating at full capacity every morning,” Jones says. They would run from 6 a.m. to noon, and then those pieces would be inserted. Because the shop ran the machines so hard, “the maintenance … of course, was escalating,” he notes.

All four printers are being replaced by the BlueCrest
AcceleJet, greatly reducing maintenance costs, and obviating the need for shells — another big savings.

Jones had put in a request for two inkjet presses, and hopes the second will be installed next year. For now, Printing Services will run two shifts on the AccelJet to handle the daily volume.

Because the press is a roll-fed device, the in-plant had to adapt its processes slightly. Each week, 16 nine-inch-wide rolls are delivered and left to acclimate. Then operators use a dolly to pick them up and transport them to the press. After printing the utility statements, the AcceleJet cuts them to 8½x11˝ sheets, which are taken to the off-line inserters. The press features dynamic perforation and has a 4,000-sheet stacker.

The AcceleJet has eliminated the need to outsource the printing of OG&E’s Currents newsletter, which gets inserted into each statement. Now, the inkjet press will print that newsletter while it’s printing the statements, saving the company a lot of time and money. 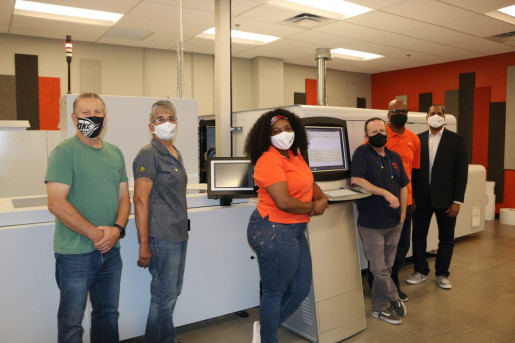 Though press installation went smoothly, one thing Jones wishes he had done differently was to bring the key company stakeholders into the process earlier, even before he started scouting out equipment.

“It would have been a lot smoother and faster if I would have had all of my enablers there and ready to go,” he notes.

The AcceleJet was installed in the in-plant’s “new” facility, built three years ago on a site about five miles from OG&E’s corporate headquarters. Though Printing Services maintains a cut-sheet printing operation in downtown Oklahoma City, the new facility is larger (about 5,000 sq. ft.) and able to accommodate the transactional printing and inserting operation. It was built with humidification and dehumidification equipment along with an advanced HVAC system.

All four operators in the new facility have been cross-trained to run both the AcceleJet and the inserters.

“BlueCrest was very instrumental with coming in and training every one of my guys,” Jones says.

The switch to inkjet was the right move for OG&E, Jones maintains, bringing efficiency, flexibility, and cost savings.