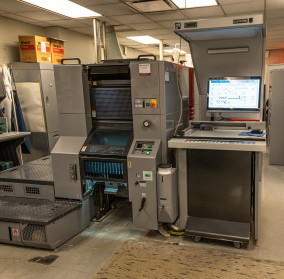 The United Federation of Teachers (UFT) Printing and Mail Department in lower Manhattan recently said good-bye to its 18-year-old Ryobi 3404 DI press — and replaced it with a new DI press: a four-color Presstek CPO 34DI.

The Ryobi had served the 20-employee in-plant well, says Production Manager Oscar Rivera. But after nearly two decades, its time had come.

“I bought that press when I first got here,” he recalls. It was part of a major overhaul of the operation that he carried out in 2002 to modernize the shop.

Though the in-plant has strong digital printing capabilities, with an arsenal of Konica Minolta color and monochrome digital presses, Rivera never considered moving entirely to digital. A self-described “offset guy,” he knew UFT’s long-run programs, flyers, certificates, and business cards would be far cheaper to print using offset. And he loved the on-press, chemistry-free laser imaging provided by DI press technology. So as the Ryobi neared its end, Rivera turned to Presstek (now owned by Mark Andy) and selected the automated CPO 34DI. 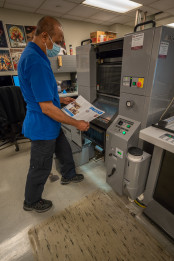 “It’s a nicer press,” he lauds. It’s also a lot faster, he adds. That’s because the newer model 34DI has six imaging laser diodes per tower; older DI presses had just three diodes. So the new press can load and image plates, preset inks, and print to sellable color in just 10 minutes, compared to 15 minutes on the previous press.

Another key feature of the waterless press is its in-line scanning densitometer, which improves color consistency by making automatic adjustments to the ink fountains. The 34DI prints up to 7,000 sph (13.39x18.11˝) on a range of substrate thicknesses up to 20 pt. It can print a 300 line screen.

Though the in-plant hasn’t had a lot of opportunities to use the new press yet due to so many UFT events being curtailed by the pandemic, the shop recently used it to print a run of 75,000 retirement newsletters on 11x17˝ sheets. Printing this job digitally would have been much slower, Rivera points out, and rife with problems. 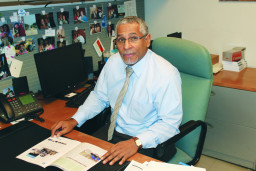 “Any copier will create some kind of a static charge to the gloss stock, so when we’re folding it, it’s murder,” he points out, with pages sticking together and jamming the folder. The shop uses Sterling Ultra gloss stock from Verso, which the 34DI press handles without issue.

The press installation in late December went smoothly, Rivera says, despite the challenges of the shop’s busy lower Manhattan location. Since the in-plant is at street level, no elevators were involved; the press just had to be moved from the loading dock, down a long hallway, and lifted with chains over two steps into the pressroom. 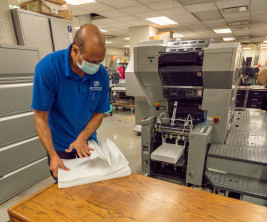 “It was tight, but it went smooth,” Rivera says.

Like at most in-plants during the pandemic, business is still slow at the UFT Printing and Mail Department. Employees come in for two-day shifts and work wherever they are needed when there are no jobs to print. Rivera praises UFT for keeping his staff employed during the pandemic.

Though he’s very pleased with the new press, and eager to put it to use, Rivera is also excited about another technology upgrade he has planned: replacing three black-and-white digital presses with a new Konica Minolta color press. This will allow the shop to provide variable data printing, such as personalizing letters to members of the UFT, a union representing education and healthcare pro­fessionals working in New York City’s five boroughs. “I always want to try to open up new avenues for our shop,” Rivera says.

From the Editor: Out and About in NYC

Three New Challenges of the New Normal
Reopening Of America: What Will This Look Like For Businesses Across The US
END_OF_DOCUMENT_TOKEN_TO_BE_REPLACED
Upcoming Webinars
Ignite Profits and Customer Satisfaction