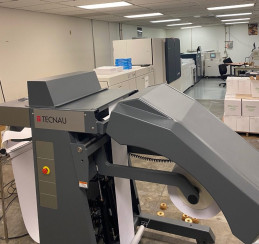 Yet another state government printing operation has installed a production inkjet press, joining six other state in-plants that have moved to inkjet. In September, the Washington State Department of Enterprise Services (DES) fired up a Xerox Baltoro HF cut-sheet inkjet press in its Tumwater, Wash., Printing & Imaging department.

According to Print & Mail Program Manager Damien Bernard, adding the Baltoro was both a cost-cutting and productivity-enhancing move.

“Considering the fact that we’re spending taxpayer dollars, I think it’s in our best interest to be looking at ways to be able to do things in a more efficient and cheaper manner,” he remarks. “That’s where I feel very comfortable with … inkjet.”

The Baltoro was part of a major equipment refresh at the 65-employee Printing & Imaging department that included the replacement of one color and six black-and-white toner devices with the Baltoro, a Xerox Versant, and two Xerox Nuvera monochrome printers.

“With the four devices — because we can do full-speed duplexing on the Nuveras now — we’ve increased our capacity, even while paring down,” he reports. The Baltoro will play a big part in improving the in-plant’s productivity, he adds.

“The speeds of the cut-sheet inkjet … and the uptime … are such that we’ll be able to get a lot of throughput,” he maintains. “We’ll be able to stay running longer with less downtime.”

The Baltoro can print 271 duplex ipm on 8.5x11˝ sheets, and 182 simplex ipm, for up to 3 million images per month. Such impressive speed and productivity has motivated the move to inkjet at state government in-plants around the country, including those in California, Colorado, Michigan, Pennsylvania, Tennessee, and Wisconsin.

Bernard has had his eye on inkjet for a while, having already overseen the installation of an inkjet press for a previous employer. The Baltoro was selected for the Washington State DES after an extensive RFP process.

Among the things that impressed Bernard about the Baltoro was the fact that Xerox manufactures the High Fusion W-Series inkjet heads itself in its Wilsonville, Ore., facility, located just two hours south. Those heads provide high-definition 1,200x1,200-dpi resolution — more than enough for the black-and-white transactional materials the in-plant is moving onto the inkjet press.

Once that work is running successfully, Bernard plans to transition preprinted forms that include color over to inkjet, such as titles and renewal notices for the Department of Licensing, and tax forms for the Department of Revenue. Over the next couple of years he hopes to push 70% of the in-plant’s cut-sheet printing to the Baltoro. He intends to talk with customers about the capabilities of the Baltoro and how they can increase the value of their documents by adding color — without a significant increase in cost.

Eventually, he would also like to move some work from the in-plant’s offset presses onto the Baltoro. To enable this, the shop added an in-line Watkiss PowerSquare 224 production booklet maker to the back end of the inkjet press.

To prevent the stitcher from slowing down the productivity of the Baltoro, the in-plant added a C.P. Bourg Sheet Feeder (BSF) unit between the two, which will accumulate printed pages and feed them to the stitcher. Pages printed on other devices can also be loaded into the feeding unit.

On the front end, the in-plant has installed a Technau SheetFeeder BV, which includes an unwinder and a cutter. It feeds single sheets of 8.5x11˝ into the press and has a perforating blade, which obviates the need for pre-perfed stock.

Bernard is pleased with the entire solution his operation has implemented, which brings it closer to its goal of becoming a true white paper factory.