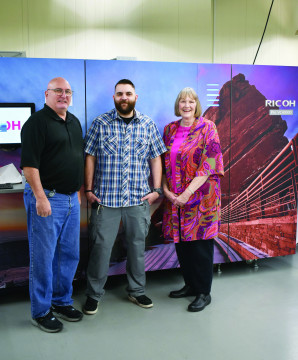 Cheryl Buxton is pretty upfront about the age of her in-plant’s equipment. Visitors to the state of Kansas’ Office of Printing & Mailing have jokingly compared the production floor to a print museum, she laughs. One end-sheet machine, for example, has been in continuous use since Prohibition. The armada of antiquated Multiliths and small offset presses would make any old-time printer feel at home.

That all changed recently, though. After investing close to $6 million, the Topeka, Kansas, operation has gone from old-fashioned to state-of-the-art in one fell swoop.

In December, the 34-employee in-plant installed a four-color Ricoh Pro VC40000 continuous-feed inkjet printer along with a collection of advanced automated finishing equipment from Standard Hunkeler, Muller Martini, and Kluge.

This is the first major upgrade since the in-plant added a Muller Martini Bravo-Plus saddle stitcher 12 years ago. The speed and quality improvements from the inkjet press alone have entirely overhauled the operation, which traces its roots back to the late 1800s.

The decision to move to inkjet was driven by a drastic reduction in offset press operators in recent years.

“Three years ago, we had six press operators,” notes Buxton. “Today I’ve got one. That’s the main reason that we really had to make a decision very quickly to go to the inkjet.”

Retirements and the recent death of a dedicated 45-year employee left the in-plant without enough people to run its presses. What’s more, the two black-and-white Miehle offset presses the shop relied on to print legislative materials in previous legislative sessions were barely limping along.

“We knew that those black-and-whites were not going to survive,” she says.

Last year, with the 2022 Kansas legislative session scheduled to begin in January, Buxton and her team felt intense pressure to upgrade. Knowing that other state printers around the country had already switched to inkjet for legislative printing, forms and transactional materials, she was convinced this was the right direction to take her in-plant. 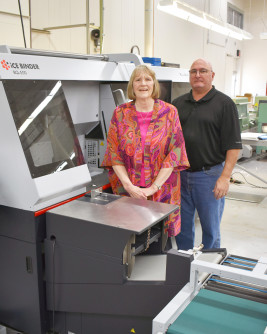 She and David Lord, deputy director of digital and wide-format, spent much of 2021 researching and looking at inkjet presses. They visited inkjet users and asked probing questions. The Ricoh Pro VC40000 they ended up purchasing was the very model Ricoh had on display in its Boulder, Colorado, Customer Experience Center. The press can print 590 fpm in monochrome and up to 492 fpm in color, and features an in-line Standard Hunkeler roll-to-roll solution with a DP8 dynamic perforator.

“It’s a game changer,” remarks Buxton, who notes it will easily be able to meet her customers’ increasingly stringent turnaround demands. The in-plant has already moved work from both offset and toner devices over to the VC40000 with great results.

“The setup time on offset versus the VC is like day and night,” she says.

Though the press is only printing spot color at the moment, the results have been impressive.

“The color is much better than we thought it was going to be,” observes Lord.

One challenge the in-plant has faced since installing the VC40000 is getting rolls of paper for the press.

“We’re still chasing paper,” Lord says. “All of our allocations were in cut sheet.”

He’s been working with multiple paper vendors to get paper, and Ricoh has even stepped in to help find rolls.

Nathan Taylor, a manager in the Office of Printing and Mailing, sets up the Hunkeler CS8 cutting module, part of a major influx of finishing equipment at the in-plant.

As big a change as the inkjet press is making at the Office of Printing & Mailing, the new finishing equipment is bringing a similar transformation to the bindery. The in-plant had no automation features on its bindery equipment previously, so operators have been blown away by the new machines.

“I had one of my operators come up to me and she just was almost in tears,” reports Buxton. “She said, ‘Thank you, thank you, thank you.’ She said, ‘I had no idea this technology even existed,’ because she’s been so used to working on the antiquated equipment all her career. She’s just loving it.”

The in-plant opted for near-line finishing for work produced by the VC40000 so the press can run at full speed and not be slowed by the finishing equipment.

Buxton has been very impressed with the technology on the Standard Finishing equipment.

“The touch screens are very much alike, and so an operator can move from one to the other,” she notes.

Thanks to the new equipment and all the automation it has brought, fewer operators are now needed, and the shop has become much more efficient. 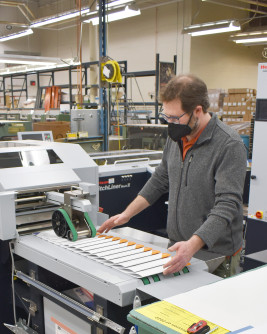 The next step, she says, is to move out the old equipment the in-plant no longer uses and rearrange everything else in the 79,000-sq.-ft. shop for a better workflow.

“Once the older equipment is off the floor, then the flow of the new [work] will be great,” says Lord.

Even with the VC40000 in place, Buxton has not stopped planning improvements to her operation. She envisions adding a cut-sheet inkjet press at some point to better prepare the shop for the future.

“I always said I’m going to leave it better than I found it,” she says. “Because it was bad when I found it.”