The first In-plant Innovators Conference challenged in-plants to think in innovative ways. They took this message to heart.

Innovation may not be a term uttered very often in the in-plant industry, but it’s certainly something in-plants are eager to pursue. That was obvious at the recent In-plant Innovators Conference, produced by In-plant Graphics, which drew managers from all over the country interested in hearing new ideas and drawing inspiration from their progressive peers. 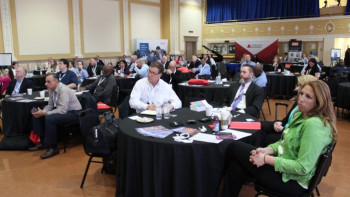 IPG's In-plant Innovators Conference drew managers from all over the country.

“This conference was useful as a guide on what others are doing to be successful,” lauded Julio Rosado, manager of the New York Police Department’s in-plant. “The conference was informative, loaded with different success models and a great networking opportunity.”

“The content was balanced,” added Brian Trott, with the U.S. Senate’s in-plant. “Everyone I spoke with there felt like there was something they could take back with them and use in their shops right away.” 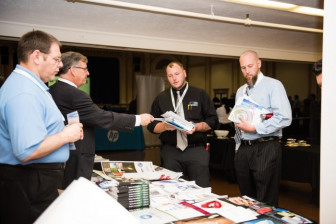 Managers from the U.S. Senate's in-plant visit one of the vendors.

The conference took place at the U.S. Government Publishing Office (GPO) in Washington, D.C., where IPG held its 2015 and 2016 “DigiGov” conferences. Karen Keenan, president of Integrated Methods Group, coordinated and chaired the conference, in cooperation with IPG Editor Bob Neubauer. It included a tour of the GPO’s expansive in-plant, where attendees got a behind-the-scenes look at GPO’s Timson Zero Make-Ready web press and its new Muller Martini digital adhesive binder. Attendees came from up and down the East Coast, and from as far away as Texas, Colorado and Kansas.

“I’m always looking for new ways to meet other in-plant managers and gain valuable insight to current trends and topics. The In-plant Innovators Conference did just that without taking too much time out of my busy schedule,” praised Erica Derrington, manager of Olathe Public Schools’ in-plant, in Olathe, Kan., adding that the GPO tour was “an extra bonus.”

The one-day conference focused on innovative practices and technologies being used by successful in-plants. Five of those in-plants were honored with In-plant Innovator Awards. They each presented a case study highlighting their innovative accomplishments. They were nominated for the awards by the conference’s five top sponsors: Canon Solutions America, Muller Martini, Ricoh, Roland DGA and Xerox.

To set the mood, keynote speaker Dr. Ayman El Tarabishy, executive director of the International Council of Small Business and associate teaching professor at George Washington University, told in-plant managers that by becoming “digital entrepreneurs,” they can transform their businesses for the digital age. 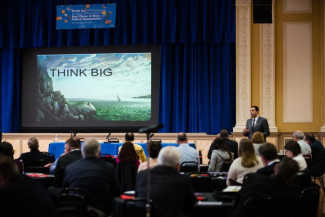 Creative innovation must be actionable, he stressed; it’s not enough to simply dream up a product or solution, you need a plan to implement it.

He cited some disruptive technologies of the past, such as the Xerox 914, the first copier. The world needed a faster, cleaner copying machine, but companies weren’t willing to pay the high price tag for the device. So inventor Chester Carlson allowed them to lease it. He gave them 2,000 free copies, but required them to pay a couple of cents for each additional copy. Armed with the technology, companies began making thousands of copies per day, and we know how that turned out for Xerox. Carlson’s idea could have failed, however, if it were not well executed.

El Tarabishy cited the strategy of Apple’s co-founder Steve Jobs who believed that simply putting great products in front of customers would inspire them to continue to open their wallets. Managers should think the same way about new services.

He also noted the “good enough” theory of disruptive technologies; once people think a product is good enough to replace an existing one, they will make the switch en masse. He cited the early cameras in cell phones. Once their quality became good enough, the public abandoned their cameras and used their phones exclusively.

“You have to be all three of these at the same time,” he said. 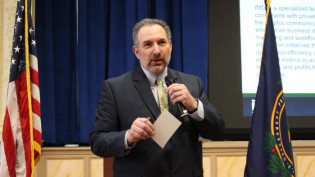 Fenton noted one curious change he has observed in the outsourcing business.

“The threat of outsourcing is evolving,” he said.

In the past, facilities management companies were quick to approach management with pitches to take over their in-plants. These days, however, there’s not enough money for them in doing this, Fenton said. So instead, outsourcing firms focus on the copier fleets at companies and organizations, looking for opportunities to take over both the fleets and the production print operations.

This makes controlling the fleet an imperative for in-plants. It is, after all, a logical extension of what in-plant managers do best, he said.

Managing the fleet was one of three suggestions Fenton had for in-plants looking to add revenue. Insourcing work from outside the organization and offering value-added services were also crucial, he said.

“The future is building innovative services based on digital printing services,” he said.

For a real-world view of innovation in the in-plant, IPG’s Neubauer interviewed a panel of in-plant managers from the Commonwealth of Pennsylvania, the State of Tennessee and The World Bank Group. They shared how their in-plants are transitioning from copy shops into valuable partners. 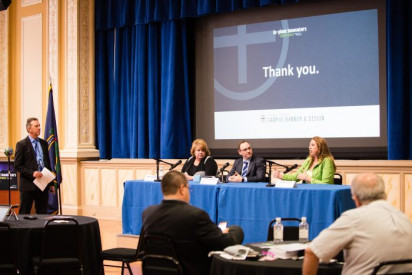 Marcie Carr described how the Commonwealth of Pennsylvania’s Bureau of Publications has incorporated automation so that jobs move from the Web-to-print system all the way through to shipping with minimal touch points.

“We try to make ordering easy for the customers,” she said. “The relationships we have with the agencies are very important.”

Tammy Golden reviewed how transactional printing was moved from the State of Tennessee’s IT group into her in-plant, and how she brought it from a revenue-losing operation to a $1 million a year revenue generator. 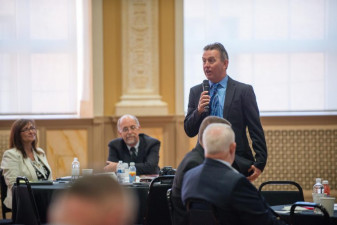 “We are transitioning to more state-of-the-art operations, and we are able to reduce our pricing,” she explained. “We went from just being order takers to becoming strategic partners.”

“For the past two years we have been exploring virtual reality, where you can get transported into a different place, and creating films and photos where you can explore other places,” Vainstein explained. “It’s about trying to go beyond the message.”

A Roadmap for Transition

The last speaker was David Zamorski, senior director of Enterprise Print Advisory Services at Information Services Group. He discussed how to establish a “roadmap” for transitioning a print operation and finding hidden profit opportunities. 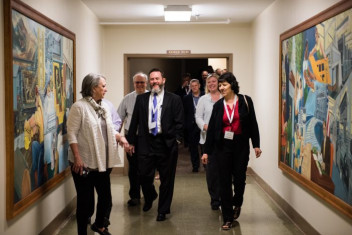 Managers head off on a tour of the GPO.

He recommended using process mapping to provide a clear and detailed illustration of the sequence of your processes. This will show you your pain points, bottlenecks, variations in the process and weaknesses and help you see whether or not improvements can be made to the current process. Do this before you purchase any software, hardware, equipment or engage in any automation, he said.

“Without mapping your workflows you will not capture your ‘exception touches’ that are the number one killer of an efficient process,” he noted.

He encouraged in-plants to automate their workflows, which will eliminate the repetitive, expensive, error-prone touches associated with manual processes. Automation allows in-plants to do more with less, which reduces costs, allowing for expenditures on new technologies.

“You cannot automate without enabling change throughout the organization,” he pointed out.

The In-plant Innovators Conference wrapped up with a networking reception where enthusiastic attendees shared their feedback on the event.

“An in-plant conference centered on Innovation was an excellent idea,” noted Vainstein of The World Bank. “It’s great to see a group of colleagues all focusing on improving their operations and keeping up with new technology trends.”

“The conference was very informative,” added Michael Bowers of ANSER. “I walked away with actual information that I can use to improve services and efficiency.”

Five Ideas to Increase Awareness of Your In-plant

From the Editor: The Way Forward

The INg Conference Showed How Nothing Beats Face-to-Face Meetings
END_OF_DOCUMENT_TOKEN_TO_BE_REPLACED
Upcoming Webinars
The “Rolling 20s” Are Here: Are You Ready?