‘Leap of Faith’ Pays Off for Paul Sprow

In 1979, there weren’t too many job options in Manassas, Va., a small town on the fringes of Washington, D.C.

“There was the phone company, the lumber yard or IBM,” reflects Paul Sprow, manager of the Digital Production and Mail Center for Arlington County, Va. And since his father and sister worked for the phone company at the time, the recent high school grad got a job there too — in the print shop.

It was a good fit for Sprow, who already had an interest in printing after taking a high school print class. He spent a few years there, then went to work for the second of his three options: IBM. There, he served as supervisor for several of the company’s copy centers.

At the same time, though, Sprow’s interest in printing was so strong that he took a part-time job at a local lithographic shop. There, he started to learn more about digital printing, in addition to the offset technologies he had thus far been working with. 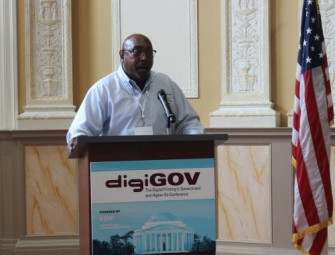 Paul Sprow speaking at the DigiGov conference in Washington, D.C.

“I got tired of getting ink on my fingers,” Sprow says. “I got more into the digital field, and wanted to get more experience with the digital equipment.”

From there, he moved again, this time to work for Mobil in Fairfax, Va., in the print shop. He continued working part-time with outside printers, so he could learn more about the evolving digital technologies.

“And then, in 1996, I ended up working for a local government,” Sprow says — Arlington County. The move was more strategic than lucrative, he reveals, as it paid $10,000 less than the salary he had been making.

“But I thought coming to the County would benefit me in the future,” he says. “I took a leap of faith to come here, and it has paid off.”

When he arrived, Sprow notes, nothing was networked and it was a DOS environment, so his first order of business was to modernize the in-plant and upgrade its technology. In doing this, he was able to bring an IT person onto his staff, something he’s very proud of.

“I didn’t want to rely on the County’s network people,” he explains. “They have bigger responsibilities than the print shop. But to run all of the programs, we needed to be in charge of the servers we use on the front end, and we needed someone to maintain that operation.”

The result has been impressive, enabling the in-plant to take on additional jobs, such as the daily mailings for the Commissioner of Revenue, whose office sends the files nightly. An employee prints, inserts and mails the pieces the same day.

“If I didn’t have an IT person to process those files, we couldn’t do that job,” Sprow says. “Having that person on board is very important to drive this operation.”

Beyond the IT side of the operation, Sprow is proud of how many departments decide to use his services. Arlington County’s shop doesn’t have a budget, but it also doesn’t have right of first refusal, so county departments can send work to outside printers without penalty.

“My division is one of the biggest in the county, but they can still go elsewhere to get the work done,” he notes.

However, he runs the operation in such a way as to make it more attractive to all of the department heads, making sure jobs are turned around far quicker than most other shops in the area could manage. He also advocates having a personal relationship with customers, which allows the shop to accommodate last-minute requests or needs far quicker and easier.

Another big change Sprow brought about was the transformation from a pure offset operation to one that embraces a range of technologies. He notes that when he started, the in-plant operated six offset presses; today it has just one offset press, along with four Xerox and three Pitney Bowes digital presses.

He has also started investing in wide-format printing equipment. Two machines have been installed in recent years so the shop can print items such as banners and outdoor corrugated signage instead of outsourcing the work. In addition, Sprow added two Pitney Bowes mail inserters, allowing for large mail jobs to be done in-house with postal discounts.

Sprow doesn’t stop his drive for excellence at the doors of his shop, however. In his spare time, he enjoys working for the George Mason University Freedom Aquatic & Fitness Center, where he is a manager and sports instructor.

“That’s my release from the County,” he notes.

On Sundays, he manages the aquatic center, but his favorite activity is running basketball classes for kids age eight to 14 on Saturdays.

“That is my biggest enjoyment,” he notes. “I played when I was young, but I blew out my knee. Now it is something I can give back to the kids.”

Sprow notes that his grandsons are in the class now. He has a blended family, with seven children between him and his wife. The youngest just graduated from the University of Alabama and took a job in Detroit.

He notes that his wife is actually his third. They met 25 years ago when they both worked for Mobil. His youngest son needed a kidney transplant, and she had two daughters who were killed at a young age, so they donated to the organ transplant program. They started to talk and share their experiences, and the rest is history. In addition to the children they both had from their previous relationships, they also had one child together.

Looking ahead, Sprow notes that he plans to retire in the next few years when he turns 60. He plans to relocate to Florida, but hasn’t decided yet if he wants to continue to work in the printing industry or work for a university in its sports facility.

“I have at least five more years of work in me after that,” he notes. “Come 65 or 67, though, and I’ll be sipping cocktails on the beach.”

Looking back, Sprow notes that if he could do it all over again, he absolutely would.

“When I looked at this in high school, to me it was the cutting edge. When it went from offset to digital, it was new and unique,” he says. “I’m glad I went the path I did, and I have no regrets.”

He credits a strong faith in God as a big part of his success, noting that when things do go wrong, he has to sit back and remember that throughout the journey there will be bumps in the road. He notes that he often tells people that God gave everyone a specific talent, and once you find out what it is, you should run with it. That is something he has strived to uphold throughout his career.

As he begins to wind down this part of his journey and start the next, that is a philosophy that will continue to drive him forward. Sprow’s family — both at home and the one he has built in the offices of Arlington County’s government — will remain a top priority even as he searches for the next big adventure.

A One-Man Mission to Prove Possibilities of Print