The World Bank Group’s Printing & Multimedia unit has been a pioneer with virtual reality (VR) technology. Through various projects, the Landover, Md., in-plant has allowed experts to virtually immerse themselves in different parts of the world to help people living in poverty and those affected by conflict. 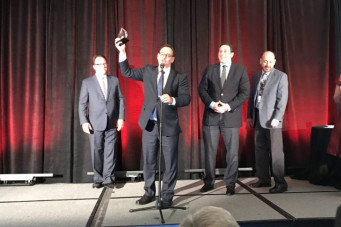 Its high-tech efforts to aid the altruistic goals of The World Bank were rewarded recently when the in-plant was presented with the Organizational Impact Award during the In-Plant Printing and Mailing Association (IPMA) conference in Pittsburgh. Senior Project Manager Jimmy Vainstein accepted the award for his in-plant.

The in-plant used VR for a full year to test and promote the services, while also producing various VR projects. As a result, it became clear that this technology could impact the way the organization communicates and visualizes mission assessments.

“What’s impressive to me as a manager is that my team took a cool and cutting-edge technology and made it applicable to the core mission of The World Bank by creating an immersive media environment in which viewers got to experience bank projects in action,” says Dave Leonard, division manager.

The ultimate goal of the VR program is to virtually transport stakeholders to poverty-stricken or conflict areas to build a unique level of empathy and engagement, leading to improved reporting and more efficient decision making. The staff can easily access the 360-degree cameras through desktop computers, mobile browsers and with VR headsets. 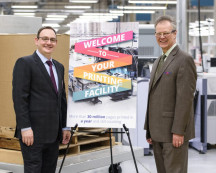 The in-plant tested the 360-degree cameras in several places including India, Nigeria, Nepal, Korea, Colombia and Italy. The missions were successful because they improved team communication overall and captured the viewer’s imagination, providing a deeper understanding of the findings.

The in-plant firmly believes in the potential of these technologies to advance poverty-reduction initiatives. Its VR program will continue to utilize this technology to explore new ways it can further the mission of The World Bank. 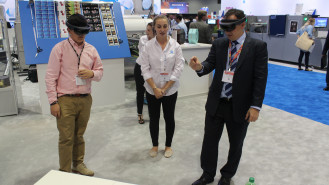 At the Konica Minolta booth at Graph Expo 2016, The World Bank’s Jimmy Vainstein (right) uses virtual reality goggles to examine the AccurioJet KM-1 inkjet press, which was not physically at Graph Expo.

“I’m very proud of our team for this recognition and embracing an opportunity to have real impact in helping our organization in its poverty-reduction initiatives,” says Vainstein. “This was a great collaborative effort that proves that a team with free range to satisfy their curiosity and innovate can only bring great results.”

Using VR and 360-degree images could also aid in the process of assessing damages after natural disasters. The technology will virtually transport experts and decision makers to the affected area to evaluate damages, allowing experts to learn how to better prepare for disasters and to identify potential risks for prevention programs.

Other World Bank projects concentrate on areas affected by conflict (i.e., war, political instability, etc.). In these areas of conflict, security restrictions prevent experts from working on projects to improve the countries’ infrastructures and other issues. VR visualization can help experts gain virtual access to these areas to evaluate projects and contribute to those in need.

Innovation in a Virtual Space

Should You Use Augmented Reality With Direct Mail?

The INg Conference Showed How Nothing Beats Face-to-Face Meetings
END_OF_DOCUMENT_TOKEN_TO_BE_REPLACED
Upcoming Webinars
The “Rolling 20s” Are Here: Are You Ready?